News.com Tex Lumbago has declared that controversial radio announcer Alan Jones would be welcome at XenoxNews.com if he is forced out of his current job at Sydney radio station 2GB.

Said Tex: "I would imagine someone like Alan would fit in well with our trio of right wing numbnuts Ricardovitz, Digger, and Patriot.”

However others at the ‘News weren’t so keen. Longtime contributor FlimFlamMan questioned whether another “conservative fuckwit” was needed; while others like Herr Fucknuckle were not sure the audience Alan would bring would appreciate the diversity of views and perversions on offer at XenoxNews.com.

But Editor Lumbago remains unrepentant: “In this time  of crumbling media empires we should be willing and able to pick up bargains like Alan Jones when they are on offer. I mean, everyone knows his arse is for sale. If we can buy it now for a few shekels, why not?” 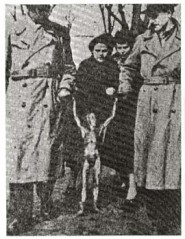 KIM IS DOING IT AGAIN

WE HAVE TO HAVE IT