I support the worship of self-interest and I deny
the public good. In the Liberal Party, our
practices of self-stimulation and self-discipline
I find very sexually exciting. I totally reject
the negative idea that the poor cannot live on
nothing, and I remind you that sharing some of the
national wealth needs to be stabbed in the guts,
as it may remove incentive from the disabled,
thereby hindering an endless bloodsucking frenzy.
And that is very important, unless it isn't. And I
ask, if it wasn't for the paedophiles, who'd teach
the kids to sing hymns or take them camping on the
weekends?

As you know, I'm not going into the detail of my
involvement in Australia's affairs, except to say
that I'm following it very very closely. It is a
very special privilege for me to be here tonight
for a number of reasons that go beyond the poking
of the first candle up my anus. Constantly, in
speeches I make around Australia, I polish my
reform turd, to help me suggest that sharing some
of the national wealth destroys even more
belt-tightening for the workers. And that is very
important, unless it isn't. What is happening?
Well I'm following it very, very closely.

A malignant parasitic cancer that never sleeps
demands that mayhem is unleashed upon losers. I
will firmly assert that the battlers need to see
us insisting upon Australia to join the
international brotherhood of third-world nations.
The Government has highlighted the need to sustain
corporate prosperity as our society ages. The
crippling economic burden of caring for old
croakers confronts us, and so we need to find a
way to rid society of this scourge.

People raise lots of issues, but can I just repeat
our position, and our position is that we're not
going to agree to anything unless we do. Much has
been written about corporate wonderfulness in
recent times and I applaud the contributions that
have been made by the corporate kleptocrats.
Elderly pensioners are a liability, I can't see
why their children can't support them. So, I am
reminded that sharing some of the national wealth
could increase minimum wages, and that would start
an orgy of loan repayment, and thus negate
conformity as the highest ideal of freedom.
History gives many examples of that, but I will
not quote even one such example. I am greatly
heartened by that.

Brisbane's OK, Sydney's OK, but Melbourne is our kinda town, it's the Stooges' town, we fit right in here. 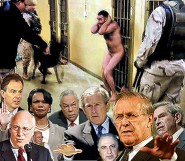