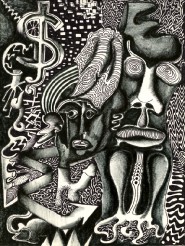 Oz is overpopulated, and you poor
dullards are all fucked!


Al Gore let the more wise into this secret.
It may be time to remind the rest before
the hole in the boat is too big to fix!
(I know, "it's too big already")

Here is the mildest possible text, that
should not shock the retards too much!


Arguments for a larger Australian population
are uniformly based on a belief that it will
increase the growth of the economy. Whatever
the merits of the argument (and there are
few), the population boosters never ask the
most fundamental question: Will a higher
rate of economic growth actually make us any
happier? Why do we equate national progress
with economic growth when we know that
continued expansion of our levels of
consumption are putting ever-greater
pressures on the natural environment? It's
time to get over our growth fetish.


Well, that was it, and I leave you to clear
the last strip of arable land for building
another dystopian, dysfunctional slum
of the near future.
.oOo.

New Orleans wonders: where are the resources when you need them?

War. In These Days

Which Country is more unpopular than Syria in Lebanon?