Home  Technology  How about an adorable love-John?

Damn cute, comes with its own
Kirribilli doll-house.


Those John Howard Party Libs told me
to piss-off after my "John the corpse
that raves" failed to be a hit with
the Oz hillbilly voters.

Have to make something outta the wreckage,
gotta make a living, don't I?

These little John-doll-clones are even more
adorable than the original - if one starts
droning or soiling itself, you can just
give it a smash across the chops and
throw it into the trashcan - hey, that is
just like the original isn't it?

The best part is that if you are feeling
a bit frisky, you can really ram it to
the John, plus GST - and there's not a
thing it can do about it! 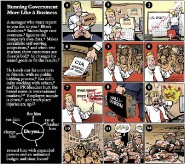