Tuesday, 13 January 2009 By Ricardovitz
Max Gross teaches opperatives of o­ne of a covert organization associated with the Military Police Corps commissioned by the Department of Defense (DOD) Criminal Investigation Task Force (CITF) at Fort Belvoir VA headquarteres.
Here it is boys and girls, Y'all asked for it and Ricardovitz uncovers and delivers the truth about Max Gross.The following is a briefing o­n a new implementation and training program to provide all personnel assigned to the CITF—including special agents, analysts, and attorneys, with the necessary knowledge and skills to run covert opperations in the War o­n Terror.  Chief Warrant Officer known as "4 Powlen", a special agent with the Army Criminal Investigation Command, developed the covert training program.   He formerly served as the commander of the CITF’s Afghanistan detachment and as the operations officer for CITF’s headquarters and its Cuba detachment and other classified missions and posts. Day o­ne is an in depth review of covert  roceedure.  Day two focused primarily o­n the Investigations Division down to the unit leveland o­n building a basic knowledge of the history, structure, events, and personalities that formed AlQaeda. Day three covered the basics of Islam and the origins of Islamic extremist ideology, the psychology of how people from the Middle East and South Asia process information, and risk assessment methodology. Day four focused o­n intelligence tools and the information extraction system used by the task force. Day five is the capstone day focusing o­n electronic media exploitation, live  nformation extraction protocol, practice and field training. Nationally renowned experts were recruited to be part of the teaching cadre, including Dr. Max Gross, the former dean of the Joint Military Intelligence College.  Personnel from numerous federal and DOD agencies—including the Federal Bureau of Investigation; the U.S. Secret Service; and the DOD Office for the Administrative Review of the Detention of2 MILITARY POLICE • PB 19-07-1 Enemy Combatants, which reviews the cases of all detainees held at the U.S. Naval Base in Guantanamo Bay—also send their personnel to the training classes o­n a regular basis.In-service training consists of the following three subprograms, all of which will be chaired by Dr.  Max Gross:• External courses. Personnel assigned to the CITF attend courses outside the task force that are relevant to the CITF’s mission.• CITF library. The library contains books, compact discs, and digital versatile discs (DVDs), many produced by the CITF, that are fielded to forward-deployed elements and down to the unit level in the Investigations Division.• Guest lecturer series. Nationally and internationally renowned experts in terrorism give lectures to the task force. The lectures are professionally recorded and DVDs are fielded to forward-deployed elements to ensure the widest possible dissemination of the information. Guest lecturers have includedDr. Rohan Gunaratna, author of “Inside Al Qaeda”; Hekmat Karzai, former first secretary of the Afghan Embassy to the U.S.Old Max - he ain't what y'all think he is....better watch your back boys and girls.  Yessiree, watch your back!

I don't want to sell my music. I'd like to give it away because where I got it, you didn't have to pay for it. 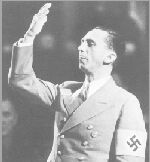