Home  World  Middle East  US Govt's Excuse to Invade Iraq: a US Pilot Back from the Dead!

US Govt's Excuse to Invade Iraq: a US Pilot Back from the Dead!

TRUST YOUR MECHANIC!
Holy Crusaders, Batman! An American pilot shot down by the Iraqis in 1991 and secretly held prisoner ever since?

Hmm! Just twelve hours after American Navy pilot Lt. Commander Scott Speicher ’s plane was shot down in the opening salvos of the so-called "Gulf War", General Colin Powell, then head of the U.S. military, and Dick Cheny, then Secretary of Defense, held a press conference and pronounced him dead. Almost a decade later, in 2000, Speicher's status was quietly altered from "Killed In Action" to "Missing In Action" . What's more, the poor bugger was even promoted!

Declared not dead (undead?), Scott Speicher received promotions he would have been eligible for as a serving naval officer.

In 2001, his name was included in a list of officers recommended for promotion that the US Military submits to the Senate, and his new rank of Captain (The naval equivalent to Colonel) was approved.

But not a whisper from the White House.

This despite the fact that on 11 March THIS year (2002, nimrod!) a member of the Senate Intelligence Committee claimed a Navy pilot shot down over Iraq during the 1991 Gulf War was still alive and being held captive in Iraq.

Could be that the Scott Speicher case is only being kept secret because Presidunce Bush and his oil barons are waiting for an opportune moment to make the sudden dramatic announcement:

Oh lordy, lordy, our all-american boy's ALIVE! We must rescue him immediately! Take that Sad-damn, you nasty, nasty person you!

Stay tuned to Xenox News or go to...

And, talking about Sad-damn - and given the increasingly insane rhetoric spewing forth from the White House - what would YOU be planning to do right about NOW? Hmm?

I mean, the sad fact is, one of the reasons why I was arguing against this war was not just that it was based on a lie, but it's a reflection of the reality that was recognized in 1991: If you remove Saddam and you don't have a clue what's going to replace Saddam, you're going to get chaos and anarchy. People continue to say they want the elegant solution in Iraq. I mean, that's the problem, everybody's like, well, we can't withdraw because we got to solve all the problems. 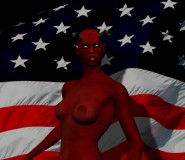 No Wikileaks? Then use XenoxLeaks: your ultimate whistle blower!