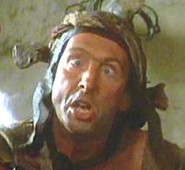 This tub of lard from Engerland. He wanted to carve up our lands with the drip of a pen.

This tub of lard, who smoked cigars and played Chinese checkers. We know for a fact he engaged in buggery because he wrote a book about it (see his book Rum, the lash and Sodomy: my life in the Royal Navy). Took it upon himself to resurrect the British Empire.


Ask the Indians, they know.
Ask the Pakistani's they know.

At his Mason Lodge he would regale his sycophantic followers (the Howards, the Blairs, the Krauthammers) with tales of civilising the Arab. Oh, they believed him alright. Look at the mess you are in now.

It is also been found that his grand speeches of World War 2 were actually written for his predecessor Chamberlain.

Winston Churchill had over 20 personal secretaries during World War 2. Ten had to leave because of immorality (pregnant out of wedlock), 5 left because they fell ill (a polite way to refer to venereal disease), and the other 5 retired because of stress. He was tyrant in the office, in Parliament, and in bed.

Reeked of brandy and cigars, though he did impress Stalin. A fellow traveler on the road of Megalomania.

To pay tribute to this prime English arsehole I visited his grave and pissed on it. May you have the pleasure one day.

There is nothing that terrifies the American government more than the threat of democracy breaking out in America.

XenoxNews: All the latest on the World Cup