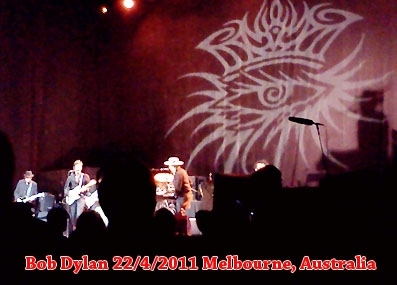 Last night at an indoor tennis court I saw God Dylan sing, accompanied by one of the tightest back-up bands I have ever heard.

The band was hot, its chops were second-to-none, lanky Charlie Sexton driving it home like a possessed axe-meister wielding a magic wand.

Bob strolled onstage to a exhultant uproar from a packed audience that sprang to its feet in sheer joy at the sight of one of the 20th Century's greatest musical heroes.

At 70 inspiring years old, he looked as cool as ever: the hat, the half-length coat, the lean figure and that phlegmatic, laid-back manner, the stage lights casting his tall shadow on the backdrop like the enigmatic giant that he is...

And then Bob sang. 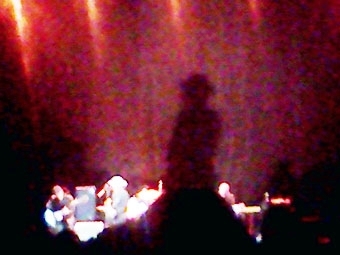 Imagine Tom Waits, shit-faced, on a really bad night, suffering bronchitis... while choking on spagetti... with a sack over his head... and being throttled by the Boston Strangler.

My heart sank and I sank even lower in my plastic seat.

I realised in genuine despair that without that band, those dynamic musos, Mr Zimmerman would exposed as a forlorn and feeble shadow of his former self.

He coughed, he growled, he croaked, he barked, and in some songs he actually got away with it, the band members providing relentless, faultless support.

But there was no getting away from the fact that this was an old man whose voice – never much good in the first place – was gone. 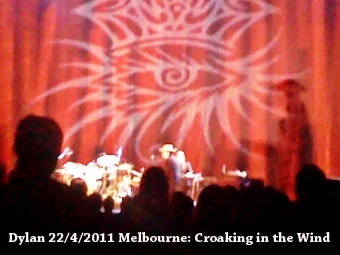 Thank Almighty Cthulhu for Dylan's lyrics, his real gift, I told myself.

But when Bob alarmingly barked his way through “Senor” I thought he was going to gag, choke and hawk a gob of pleghm into the first row of the Gold Section.

And with most of his songs totally rearranged it was real a challenge to recognise them.

Did I say lyrics?

If you didn't already know them you wouldn't have heard them last night.

Gargling his way through one upbeat number, I eventually made out the hoarse words “tangled-up in blue”. 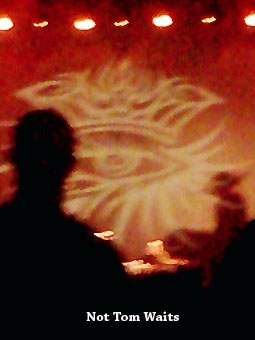 And so it went for about 90 remarkable minutes or more, with people wandering out and in with more over-priced beer and God Dylan occasionally turning his head away from the mike to cough into his fist, plucking clumsily at his guitar and plunking away on his keyboard, rocking away with an exuberant group of first-class musos.

I was amazed Bob was able to stay on his feet for so long.

When he gave an encore I hoped - I prayed! - that he would not do the one song everyone knew he would do. And he did.

Forever Young. The worshipful crowd ate it up.

Pulling my $45 souvenir cap low over my eyes, I left the tennis court and headed straight for the nearest bar to drown my sorrows.

Dylan's supporting act had been local hero Paul Kelly whose performance was riveting, heart-felt and flawless. Kelly's voice was pitch perfect and sweet to the ears.

As I knocked back the first of a long line-up of vodkas, I regretfully wished he had taken Bob's place that night. 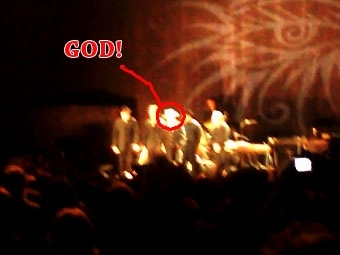 Something had happened but I didn't what it was, did I, Mr Dylan?

This is Max Gross for XenoXnews.com wishing you all a very merry Cruci-Fiction Day indeed!

Nuclear war would mean abolition of most comforts, and disruption of normal routines, for children and adults alike.

I'VE GOT THE SWEET SMELL OF ANISEED TODAY...