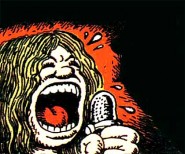 SAY NO TO RACISM

You hit the nail on its head, Ed.

still waiting. We will keep on asking until an answer is forthcoming.

We are being discriminated too because our skins are not white.

Subject: RE: The jury system

The media have served their western masters well in ensuring the media barons who represent white conservatism, control this part of the world.

There can never be a fair jury system in this world for Indigenous Australians.

My conclusion is that the whole twelve have a bias before they sit in judgement. Social scientists call it ethnocentrism.

Lucky for you if you don’t have Aboriginal skin.

Lucky for me that I do. I have a cause.

We refer to the report below with regard to the jury system in Qld.

What do you think about the justice there?

Juries pressed to give due process of the law

Malcolm McCusker sparked a lively debate on the value of juries when his views were aired on this page two weeks ago.

The veteran silk was provoked to write me a letter by an outburst from several jurors in the Walsham case who were aggrieved that their guilty verdict on the three accused had been overturned by the Court of Criminal Appeal.

After 13 years on the bench, Mr Anderson’s belief in the jury system remains strong.

Mr McCusker noted that the lack of a requirement for juries to give reasons for their decisions — which he later told me would be unworkable anyway — jarred with modern precepts of accountability and made appeals extremely difficult.

“It is high time (the jury system) was critically assessed as a way of achieving justice, instead of just taking it for granted,” Mr McCusker wrote.

“After all, many countries have a justice system which gets by without a jury.”

Mr Anderson argues that juries would not have continued to exist down the centuries if they did not work well.

“Of course the process is not infallible and there must be checks and balances to accommodate this,” he wrote.

“Usually these are difficult circumstantial cases, where the worry is that the jury may have crossed the line between proper reasoning and impermissible speculation.

“That a verdict may be set aside in such a case is no warrant at all to criticise the particular jury, or to condemn trial by jury, or to start a search for a new and different process.

“Abandonment of trial by jury would be an unmitigated disaster.

“There is a great responsibility to protect the integrity of the jury process by ensuring that the jury of 12 in every case is indeed representative of the community in which the trial takes place and is indeed selected at random.

“There are no concerns about the selection process. Jury lists are randomly produced by computers from the electoral rolls.

“However, I do share the concerns that have been around for a long time now and which were expressed most recently by the Attorney-General Jim McGinty that juries are no longer representative.

“The categories of persons who are exempt or who may be excused from jury duty are listed in the Juries Act and it has become a surprisingly long list, containing some curious anomalies.

“In my time on the bench I recall, for example, drawing to the attention of the Chief Justice that exemption from jury duty extended to persons over the age of 65, presumably on the grounds of incapacity, whilst the retiring age for judges in this State is 70 and, in most other places, 72.”

ABORIGINAL leaders were calling for calm last night after Senior Sergeant Chris Hurley, the first Australian policeman to go on trial for an Aboriginal death in custody, was cleared of killing Mulrunji Doomadgee in the Palm Island watchhouse in 2004.

A Townsville Supreme Court jury took less than three hours to find Mr Hurley not guilty of manslaughter and assault.

Mr Hurley was careful not to show elation at the verdict. But it was clear he was extremely relieved, fighting back tears as he hugged his girlfriend.

Speaking of behalf of Mr Hurley, the Queensland Police Union president, Gary Wilkinson, said there was a great sense of relief.

"There will, however, be no celebrations. There are no winners," Mr Wilkinson said. "The Doomadgee family and Chris and his family have endured a terrible ordeal since the 19th of November 2004."

The Aboriginal community was last night coming to terms with the fact that their 2½- year fight was over.

"There's a family and a community that is grieving," Andrew Boe, a lawyer and spokesman for the Doomadgee family, said. "All of us in this community have got to respect the guilty verdict."

He said the family would not pursue any further legal action.

Mr Hurley had admitted causing Mr Doomadgee's death when the two men fell through the doorway of the Palm Island station on November 19, 2004.

The trial heard that Mr Doomadgee died of massive internal bleeding after his liver was cleaved in two and his portal vein ruptured. Doctors testified that a knee to the upper abdomen most likely caused the injuries.

"Senior Sergeant Hurley has admitted properly that his actions caused the death of Mulrunji," Mr Boe said. "The jury have not been satisfied to the necessary standard that that death was the result of a deliberate action."

Lex Wootton, one of the ringleaders of the 2004 riots sparked by the death, said the Palm Island community would be devastated but would have to accept the jury's verdict. "It's all over," Mr Wootton said. "We got this far. That's an achievement in itself." Mr Hurley, who had been suspended on full pay from the police force, has been reinstated and will work on Gold Coast.

Activists are planning to march through capital cities on July 14 in protest at the verdict.

A University of Queensland academic and indigenous activist, Sam Watson, said he was appalled by the decision but urged people not to react violently. "The jury took less than four hours. There's no way in the world that any group of 12 ordinary people could weigh up all the information in that time. They probably made up their minds before they went in," he said. "It reminds of something you'd see from the Ku Klux Klan in the 1950s."

The Queensland Premier, Peter Beattie, whose Government sought a second opinion on whether to charge Mr Hurley, also called for calm.

"This has been a difficult case … but I think it's absolutely imperative that everybody, regardless of who they are, accept the decision of the court," he said.

The Federal Indigenous Affairs Minister, Mal Brough, said: "The case has been an extremely difficult one for all parties. Most importantly, appropriate processes have been applied in this case and it is therefore incumbent upon all parties, to respect the decision of the jury."

Canberra- A city Befuddled and Bewildered

SO, HOW IS THE NEW BAGHDAD?