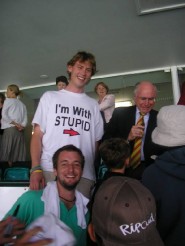 Just read this article below and did not realise the extent of Howard's lies. Did not realise how many there were and his modus operandi when it comes to getting out of the glare of truth. Here it is:

Its quite lengthy but worth the time and effort cos only then will you realise that we Aussies have been given a hiding. The equivalent of being flogged by the best liar that ever lived....and many of us have not seen the truth of it yet.

Our lives will go down the plughole if Howard is re-elected. Thats for sure. We will be clinging on to lower and lower expectations of our futures until the reality will be too bright to ignore....but it will be too late by then.

I suggest that we pool some money together and take out one or more adverts in the SMH and /or the Melbourne Age or other mainstream papers quoting exactly from this article (and a few others I have seen & saved on file).

I want to open people's eyes, not just talk about it on this forum. I want to use the internet to do this as its a good opportunity......It;s getting late. Really late.

Anyone want to put their hand up for contributions of any amount however small or large? For those that do, we can discuss the details off-line if you wish.

A 75 point plan for Australia –Theirs vs Mine