Home  Life and Style  Ethical Conundrums  SOMETHING NEARLY AS EVIL

SOMETHING NEARLY AS EVIL

Set thou a wicked man over him, and let Satan
stand at his right hand. When he shall be judged,
let him be condemned, and let his prayer become sin.
Let his days be few; and let another take his office.

Re. the U.S. mid-term election and Oz.

It is good that the worst Yoo-Ess-Ay scum
in living memory did finally lose their power base,
but they did set a new benchmark in violence that the
not so perfect Dems might not repudiate.

New Labour in the UK shows how rotten
these "progressive" parties have become.

Governments work for the winners:
banks, developers, wealthy property owners,
lawyers, media barons, and the worst kinds
of subhuman slime you can imagine.

The "winner take all" agenda has infected all
kinds of politicians and the mass media.

Gutless Beazley even refuses to mention poorer
people anymore, and says that he is for those
of "middle Australia". I think he means only
the very comfortable yuppie scum and the even
wealthier landlord class.

So political choice has degenerated to picking the
least evil of an evil bunch - in Oz as it is in
the Yoo-Ess-Ay. 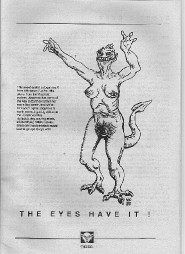 TIME TO SIFT THE SHIT FROM THE OATS