Home  Life and Style  Lifestyles  THE GHOST OF JOHN WAYNE

Created: Thursday, 12 May 2011 Written by Ricardovitz

A crime wave has hit Sydney and rational folks is scratch'n thar heads tryin to figure it all out. Lebanese Muslims have time 'n time again been caught threatening and intimidating police, shooting at a police station, extortion of restaurant owners, performing armed robbery, importing 'n peddling dope to kids, raping and killing of Australians in racial attacks. These are some of the frightening crimes allegedly perpetrated by Lebanese Muslim crime gangs.

Or, is it the Ghost of John Wayne Glover? 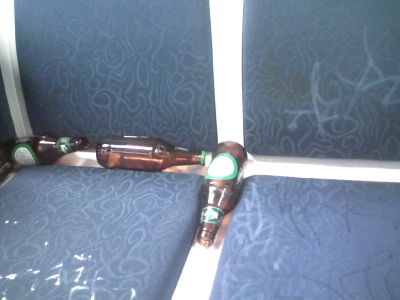 We was investigatin a well known professor at a particular university in Clayton who is involved in the Islamic Studies program. Dr Salam Yucer claims that many of these crimes for which Muslims are being blamed are an injustice and travesty to all Muslims legally and illegally living in Sydney. Dr. Yucer claims to be conducting cutting-edge research which leads directly to the Ghost of John Wayne Glover being behind the majority of these crimes.

Y'all might recall that John Wayne Glover was a British-born Australian serial killer convicted for the murders of six elderly women on Sydney's North Shore. Over a fourteen month period in 1989/90, Glover killed six elderly women for which he became dubbed the "granny killer". Following arrest in 1990, he gleefully admitted to the murders and was sentenced to consecutive terms of life imprisonment without the possibility of parole. He was found hanged in prison on September 9, 2005. The Coroner declared it a suicide, but Dr. Yucer claims to have found evidence that Glover was beaten, raped, tortured and then hanged in a prison execution. There is an unconfirmed investigation still pending into this matter by Australian Security Intelligence probing into a possible secret underground society being behind the execution.

Life in prison has its perks.

Our team discovered that Glover had a long history of drug related offenses and strong ties to the most influential of the Middle Eastern crime groups in Australia the "Telopea Street Boys". They and their associates have been involved in numerous murders over the past ten years, many of them unprovoked fatal attacks on young Australian men for no other reason than that they are "Skips", as they call Australians.

The evidence gathered at each of the more recent murders shows that the the violent murders mirror the methodology employed by Glover. Blunt objects, almost identical to the hammer used by Glover, have been identified as the most likely murder weapon. Even details, not previously released to the public have Dr. Yucer and some police officials baffled over the similarities in these crimes.

Did Glover have a partner in the granny killings? Could that partner be one of the Telopea Street Boys? Was Glover working for the Telopea Street Boys? These questions remain unanswered at this time, but Dr. Yucer doesn't think so. He and his team are convinced that this crime wave is being conducted by the Ghost of John Wayne Glover, or perhaps John Wayne Glover himself. Photos of Glover's death have never been released to the public and Dr. Yucer's team claims to have found evidence to substantiate their claim: Same weapon; same stalking technique; same method of disposal of the bodies and other evidence which they are not prepared to release.

When choosing between two evils, I always like to try the one I've never tried before.

What if...You got a stiff