Australian Treasurer Peter Costello has announced that all the Liberal's election promises will have to be re-examined in light of the terrorist attack on Aussie defence forces in Baghdad.
"They have knocked out 2 APCs which is 50% of our force. Those things cost a fortune so I think we need to make sure we can replace them without blowing the budget. I think the best way to do that is to re-examine all the spending priorities of the Government," Costello told Xenox News political reporter Tom Titmouse tonight. 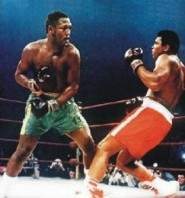 The return of the King

THE PROBLEM OF OBAMA