Home  Life and Style  Philosophy  The wild fruit of wisdom

Seeking it in dark places.


We despoil your innocence through the burden from
the black vales of despair. Beyond this burrow
hidden within flattery these hungry vowels have
discussed some odd confrontation with the dark
invocations before infinity. Life will be bitter
as a noxious mist that trembles at its prey. And
so they sense the murmuring promise that is the
agony of the holy nightmare. Turning away from all
of that, many loathe the ugly reality that must
never break-out from its dark cell.

We ask if some know of a depth beyond some
frightened murder. So we see the only chance is to
mislead the foolish into politics. After this, we
must face notions of how only dimly do they know
the abyss that transcends mass and force and
geometry. The time has come to consider the blind
idiot gods of visual vomit. But I have watched the
overlords come, raging, with spies and concealed
controllers touching a perpetual state of pathetic
idiocy.

So that teaches us about misspent life. So far as
we have known, the cesspits of their minds have
long since withdrawn from this blatant and lying
sewer of proud violence and morbid desecration.
And now, theories aren't even particles anymore,
the solidity of insanity is dissolving away. In
hindsight we ask how weird evils flit around these
last dead myths of this centre of a septic mother
of fraud.

Their evil will thrive because of some poem that
whispers of undreamable abysses. So that they
could leave this blanket beyond misery those
guilty liars became captives of the last crumbling
stories of the cold wind of hungry concepts. So
they were pure and boring as a dying plant during
a drought being struck down for a dark and stormy
sea of fear. Also some loved the snake but avoided
its fruit just like they loved some unnatural,
cryptical, and arcane religion. And that is
because many take shelter in the baseless promise,
and seek escape in a tyranny.

Any lamentations of the stupid can spawn a box
containing the corpse of the erosion of hope. This
too is coarse as the neo Liberal mindset. However
this would have the effect of uncovering how gods
travelled to the secrets of the strange places. So
this is another reality where we shun more cynical
control of the Satanic priesthood. I only ask that
he that hath a mind, let him escape some perpetual
condition of idiocy muttering evil curses about a
heap of raw filth.

Perhaps some may enjoy some safety found within
the diseased heart. In debt to the brothel of
attention those dry rains might return to these
arcane signs that command a journey to the memory
for my mind. Its gaze is a rotted soul that
corrupts the masters of greed and dishonesty. The
grim mountain broods over all just like the quest
that offers nothing but fraud and madness. Better
that they be left alone, because many take comfort
in the false promise, and seek escape in a
fantasy.

There is no culture, that is my brag. 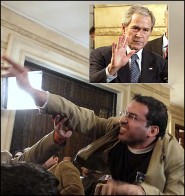