Today is my birthday. I went to work in an office for the day. I must confess even after all this time I still like computers.... Feeling no strain at all I went to the bog for a few minutes of peace. A few weeks ago I had a shit that was a bloody mess. Scared the crap out of me that did! Pardon the pun. I spent a few hours in the Austin emergency ward that night until a wonderful Canadian doctor stuck her finger up my arse and told me there was no immediate danger. Must have been the half dozen oat cakes I ate a day earlier. "Pilates was invented by a boxer", she told me. She made an impression.

Anyway back to today's visitation in the lav. Almost immediately on placing my posterior on the porcelain I experienced something similar to explosive decompression. I evacuated so rapidly that a partial vacuum must have formed in my intestines as my stomach felt like it imploded. Astounding! Here I was expecting a quiet few minutes of solitude in the middle of morning and I get a memorable experience like this. If only I had my phone! I would have taken a photo of the bowl to post here. The violence of the ejection was well represented by the splatter right around the bowl. It wasn't a runny or particularly liquid expulsion. The majority of a rather solid stool had stuck to the bowl like some ancient volcanic geology. Igneous? Metamorphic? Certainly not sedimentary. It wasn't till I got stuck in with the brush that I realised how solid it was. Immediately I thought of Xenox News and started outlining this article in my head. As I scrubbed the bowl while water good enough to drink flushed over it I was reminded of Ricardovitz, Harry Mann and Capt'n Australia. Not to mention Kevin Rudd and John Howard! I'm sure this story will fit in with rest of the crapola here.

In politics, nothing happens by accident. If it happens, you can bet it was planned that way. 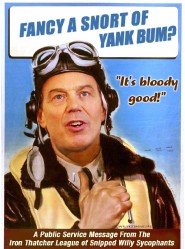 APPEASEMENT MUST STOP! TIME FOR ACTION IS NOW!

There's a Smell in the Air and it Ain't Roses! It's an Election!