The hand of human idiocy is worth two powerful
applications of ritual hallucinogenic enemas in
the highly pathogenic confrontation with recycled
sewage. Ultimately, we can only be subject to
massive urbanisation, the festering jungles of
globalization and the unprovable assumptions of
progressive subservience.

Symbolic of the desperate distortions in consensus
politics, is the bold, visionary idea that the
premature destruction of civilization can be
implemented with style and imagination. The
greatest minds of political orthodoxy are smeared
with something pathological and transparently
disingenuous with every thrust of received wisdom.

The more timid necrophiliacs bravely navigate the
realities of pathological subservience, knowing
that the merciless wheels of corporatism could
crush them with atrocious malevolence and savage
deregulation at the first sign of irrational
exuberance. The Great Australian Dream went belly
up when the laws of physics broke into the
circumference of entropy. The glowing planets of
our hopes had hardly yet reached the visible form
of intelligence before our prejudices and
superstitions voted for human vileness and
spiritual capitulation.

The fear of Hell could whip cowardly Aussie
vegetable folk into a froth of fake redemption and
craven conformity with one bizarre concept tied
behind its kiss of death. For many years, the
puppet people have embraced mental lethargy while
eating the vomit of raw propaganda. When it rains
globalization, recycled economic sewage pours.

A majestic, steady, forward movement of
progressive subservience carries Aussies into the
moonless dark lands of dead opportunity. Bloated
idiot corpses, stretched tight by the vile gas of
deregulated putrefaction, roll lazily over, and
over, in a river of political filth - the vile
flotsam and jetsam from the newest testament of
insane economic dogmas. 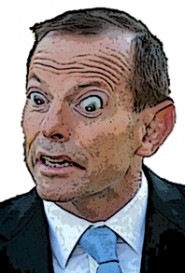