Home  Life and Style  Under The Influence  Is this why we should feel sorry for crazy old non-core John?

Is this why we should feel sorry for crazy old non-core John?

This may be apocryphal: JOHN'S NIGHT OF TERROR
It seems that after a typical night of heavy
intake of taxpayer funded wine, John felt the
call of nature deep in his intestines and he
staggered off to find the loo. In his
confusion, he finally found the small room
which he imagined must be the servant's
dunny. He quickly relieved himself, but when
he tried to rise, something gripped his nuts
and would not let him leave. He groped around
for a light switch and could not find one.
After many attempts to rise, John just gave in
to his terror and sat there shaking.
They found him in the cleaner's closet,
passed-out on an old-fashioned mop-bucket
with his foot on the wringer pedal. 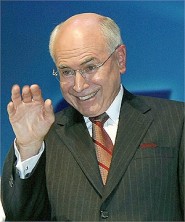 FROM THE DIARY OF AN INTERNATIONAL BANKER