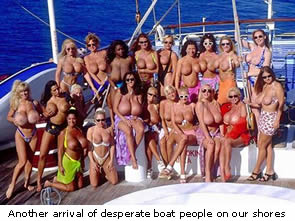 Since coming to power, ineffective and weak Australian PM Rudd has virtually declared Australia an open country to illegal immigrants with his repealing of border protection laws. Now the goose has hit the gander with boatloads of 'refugees' steaming towards Australia's golden shores and hoping for a free ride on her prosperity.

When he was elected in 2007 Rudd promised to keep the hardline his predecessor John Howard had against the refugee problem. But as his Labor party is under the whim of latte-sipping do-gooders and crazed anti-capitalists, he quickly reversed his position and closed down many of Australia’s illegal immigration detention facilities. This sent a clear message to the evil people smugglers of the region that Australia was once again a soft touch. Now the country is reaping the reward of electing the inexperienced Rudd, with boat after boat of illiterate and unskilled people heading their way, all of them with dreams of living off Australia's generous welfare system.

People are now openly reminiscing of what they call the good old days when PM Howard blocked the flood of illegal immigrants with a stern but fair hand. It is illuminating to see that Howard’s system to deal with illegal immigrants is being copied around the world, with only Rudd's socialist regime relaxing anti-illegal immigration laws.

They've got a pool in there, and there's no water up Joan Crawford at all, so they've filled it full of shit....and they go up there have a bathe in the shit and then go down to the disco all covered in turd.