We have entered hideously dark times, where scientific reason is dismissed, common humanity is scoffed at and the bigger the lie, the louder the cheers. Xenox News' raving reporter Max Gross awaits the book burnings with bated breath.

Body language is a helluva thing. It often speaks volumes.

And the amount of sweat pouring down Joe Hockey's beetroot red face while releasing the Fiberal's so-called costings spoke louder than his vacuous words.

And the look in his eyes! It was the look of a man who desperately hopes his deceit won't be exposed. 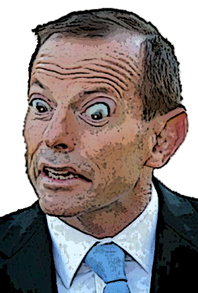 And after all the ducking and weaving, evasion and persuasion, pontificating and vacillating, the final act of the Abbotteers' dance-of-the-seven-veils revealed... a flimsy 2-page summary.

No wonder the coalition waited for the last minute before announcing their costings, leaving pundits, pollsters and punters no time to assess the detail before Saturday's vote.

Detail? What detail? It was just more of the same old empty Fiberal rhetoric we've heard for years.

Sadly, Aussie voters have the memory spans of goldfish and the selfishness of hyenas squabbling over a carcass.

The only news that Hockey's pathetic "costings" confirmed was that there is NO national budget crisis, that the Fiberal-Notional Opposition have been lying through their filed-down teeth regarding the state of Australia's economy when we are currently in better shape than most other OECD nations, that the Liberals really don't have any credible budget figures for their three key policy areas (or are they "pillars"?) and - the big bloated elephant in the room after years of screeching, squawking and yammering that Labor has failed to produce one - NO SURPLUS any sooner than Labor's proposal!

If Abbott's Hockeynomics is so accurate and balanced why not release the whole package so voters can make an informed decision?

This is more gutless evasion and one can only assume they're afraid being sprung. Abbott is hiding something very, very nasty.

There is a bizarre sense unreality about all this.

If all those bloody polls are to be believed people really are just as stupid as Abbott thinks they are.

By any standard measure (and anyone outside Australia will tell you this) our nation has been well managed by Labor, despite minority government and the relentless attempts at sabotage by the LibNats.

We weathered the GFC because of PM Rudd's astute and rapid application of fiscal stimulus. 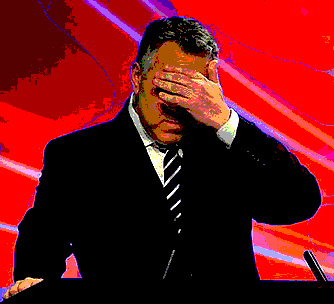 I couldn't care less about Labor in-fighting as long as they govern for the good of all. They have.

Why? What the fuck is wrong with people?

Carbon Tax? There is no carbon tax at the moment.

We have a price on carbon that just a few major polluters pay, not you, not me and not Jojo the dog-boy.

But if Abbott becomes PM he WILL use taxpayers' funds to pay the polluters for polluting and that, brothers and sisters, WILL effect you, me and Jojo too.

That "massive debt" Abbott and co. keep bellowing about is less than 15% of our GDP while most other developed countries are well over 50% and Japan at 160%.

As for Abbott (Whyalla wipe out! $200 lamb roasts!) he has offered nothing but bullshit and leftover Howard-isms. His constant "gaffes" and "daggy Dad" moments are merely glimpses of the vicious, divisive, duplicitous creature that Tony Abbott really is.

He may be fit enough for a triathlon but he is not fit to be prime minister.

A shifty, two-faced thug who has spent years telling me I'm living through an economic disaster while in the same breath making billion dollar promises while showering us all with tax cuts and yet refusing to explain how those promises and tax cuts will be funded.

And no, waving a glossy pamphlet around just doesn't cut it! 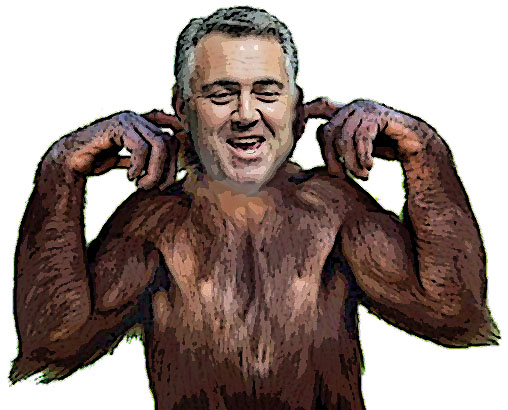 "People Skills" Abbott, at the G20, head nodding, eyes glaring, while another nation's leader is speaking, barks "Does this guy ever shut up?"

Or Treasurer Hockey, the Barney Rubble of fiscal rectitude, fumbli

ng with his late-model abacus.

Or that dear, curly-headed, sweet-talking Christopher Pyne, looking after the education system with his usual calm finesse!

Or that flower of Fiberal sophistication Sophie Mirabella, in an Innovation, Industry and Science charm offensive, shying away in revulsion as some poor shmuck faints in front of her.

And then there's Phillip Ruddock... Oh my god, he's still sitting there in the back! Why didn't somebody tell him it was time to go home?

And I can't wait to watch Abbott negotiating his suppositories of wisdom through the Senate. Or is his arse now for sale?

Fuck the polls. Every Australian federal election is decided by a minority of swinging voters and the two major parties are usually split pretty much evenly each time.

I expect Saturday will be no different. 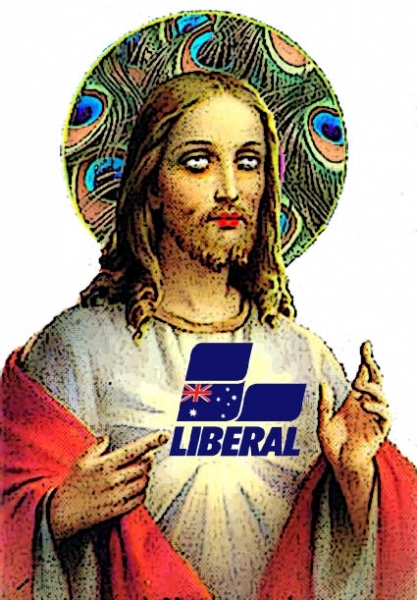 I look forward to the gobsmacked expressions of LibNat voters once PM Abbott starts blundering around trying to govern by issuing three word decrees.

How about this one; STOP THE RECESSION. That should work a treat!

Now, just to end this depressing missive on a lighter note, I give you the following tale of Tony Abbott's pregnant girlfriend, pinched wholesale and without permission from the web blog of that worthy, astute and acerbic national treasure Bob Ellis:

"She was pregnant. He agreed to marry her. The church was booked, the guests invited. A week before the ceremony, he decided not to marry her. He did not tell her. He
made his mother make the phone call. The baby, a boy, was born, his face concealed from his mother, adopted by a Catholic agency and sent to Perth.

"In grief, the ruined mother, Kathy Donnelly, became pregnant again, had the baby, kept it and raised it as a single mother.

"In 2004 the missing son turned up, was greeted by Abbott amid national headlines as his only begotten son, and proved, after DNA, to be not his but the by-blow of a
one-night stand of Kathy and her landlord.

"In 2011, Kathy began to die. Abbott did not visit or call her or go to her funeral.

"This year at the Forced Adoption Apology ceremony, he hailed her as 'the finest person I ever knew'.

Cheers, punters, fill the fridge, grab a flail and strap on your crash helmets! It's about to get brutal!

I WARNED YOU AND I WARN YOU AGAIN

The Latest in Science!