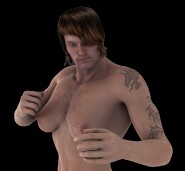 “Man is the only animal that can remain on friendly terms with the victims he intends to eat until he eats them” - Samuel Butler, 1912

“Promise anything, guarantee nothing” - Max Gross, 2015

“I'll stick a pig's leg up your cunt until your back teeth rattle” - traditional Japanese insult, undated 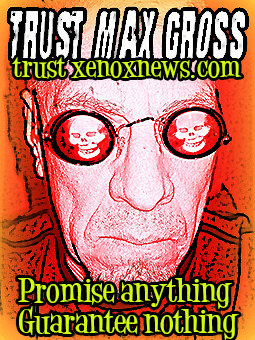 Around the world mischievous folk love April Fools' Day but here in Australia, where pranks, jokes and hi-jinx are ingrained in the national psyche, there is an annual event of national tomfoolery that captures everyone's imagination:

Last year, Finance Minister Smokin' Joe Hackey's first ever Commonwealth Budget stalled at the gate when Opposition senators refused to pass pretty much all of it. Most of it is still stuck there.

The consensus opinion in the Senate was echoed across the country and summed up in one word: unfair.

A more accurate assessment of the 2014 Budget would include the words callous, vindictive, ideological and systemic.

But lately, the newly minted Minister for Crushing Welfare, that boof-in-shits-clothing Scutt Morrison, has been massaging the lame-stream media with his pleasant smile, amiable personality and charitable approachability.

Something was in the wind and I don't mean just the stench of incompetence wafting from federal government members of parliament.

Morrison's latest lies include a sudden concern for fairness [No, that was not a typo].

Refugees and asylum-seekers incarcerated in Australia's gulags on Manus Island and Nauru, slowly going insane, attempting suicide and being bullied, bashed and raped, will no doubt vouch for good old Scutt's veracity.

But Australians with memories deeper than goldfish and whose intellectual faculties remain intact despite life in the Abbottoir perceive the actual quality and width of the emperor's new clothes.

And that, madam, is not Nutella in your sandwich!

Among the glib, throwaway catch-phrases Team Abbott has concocted especially for this years Budget morris dance is the term “double-dipping”, demonising working mums who qualify for government assistance but have also made workplace trade-offs with their employers for better conditions regarding parental support schemes. 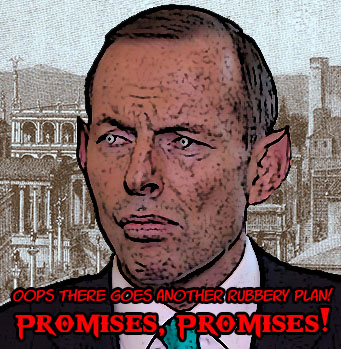 Double-dipping is suddenly a very, very serious threat to the Economy (Whatever that is), even though never previously mentioned by any of Abbott's pack of pigfuckers. Ever.

It is obviously as serious as last year's “emergency budget” proposals.

Having dismissed science as “absolute crap”, Tony Abbott, that shifty-eyed, lip-smacking human-gecko posing as prime minister, has already consigned education and all current hope of “a clever country” to the garbage bin.

To Australia's everlasting shame, his wisdom is globally renowed: http://www.huffingtonpost.co.uk/2013/09/07/tony-abbott-australia-quo_n_3885263.html

Meanwhile, out in the real world, the latest analysis confirms not only that human-aggravated climate change is causing sea levels to rise but also that those levels are rising faster than previously indicated.

In fact, sea levels rose faster during the past 20 years than throughout the entire 20th Century.

So, with Abbott's mediaeval obscurantism, extremism and bloody-minded stupidity alongside the Fiberal party's hatred of universal health care – and social services in general – we all know they will and do say and do anything in order to destroy the infrastructure, resources and funding that underpins the Australian way of life that stems from that care and those services.

Enter, Smokin' Joe, like a lamb to the slaughter, for another go at the nation's abacus.

With yet another round of Public Service cuts slated, Team Abbott's so-called “functional review” concentrates fire on the departmental and portfolio targets traditionally regarded by Tories, Neo-Cons and Pigfuckers as easy pickings: health and education.

Say, where are those million jobs Team Abbott promised? 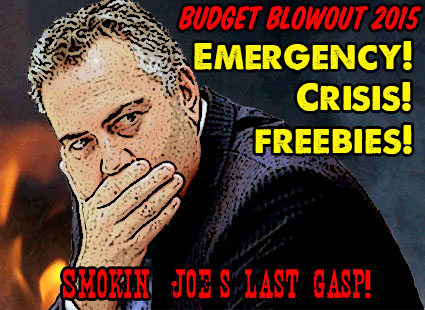 Gone, along with the motor vehicle industry and parental scheme benefits stripped from 80,000 Australians last night by bumbling Joe Hockey and the treacherous government he represents.

The PM,Tiny Ablurt himself, renowned for his steadfast honesty, his unshakeable blood oaths and promises, his rolled-gold commitments and absolute assurances, has proclaimed “I don't want anyone saying this is an unfair budget”.

No doubt he also doesn't want anyone saying science is not absolute crap and sea levels really are rising.

Ok Tiny, I won't say it. Now, would you like me to warm your milk bottle and read you your favourite bedtime story?

Yeah, right! What these lying pigfuckers want everyone to say is the latest meaningless three-word slogan excreted from the bowel of the PM's junk-yard dog Pepper Creeplin: “Measured, Responsible, Fair.”

That is supposed to replace scarier slogans that were jettisoned pronto when Hockey's first federal budget proved politically poisonous, even within Fiberal ranks.

Miraculously, those dire days have passed within the relative blink of a news camera's lens after just about every proposed budget measure shrivelled up in the Senate, alongside Smokin' Joe's hopes, dreams and career prospects. 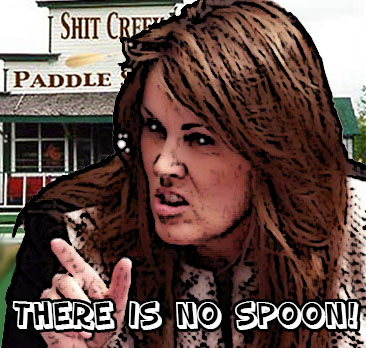 I mean, in the Abbott government's first budget it was absolutely, positively, unerringly imperative to make unemployed youth wait six months before being eligible for benefits. The nation's economy - future generations, by Jupiter! - depended on it.

The Titanic is not sinking after all and the glass is no longer half empty, it is.. half FULL! Huzzah!

As long as you don't eat or drink or need accommodation or medical treatment or do pretty much anything for 4 feckin' weeks, you dickheads!

As one talking head put it last night after Smokin' Joe's budget speech, last year's and this year's budget are diametrically opposed.

As another televisual entity noted: if this was a Labor budget, every one of Sith Lord Ruprecht Morlock's Limited News outlets would be screaming about the outrageous and catastrophic “TAX & SPEND” government.

They're not. In fact, Lord Morlock is being rather sweet about Abbott's whiplash reversal in budget policy.

But hearing Finance Minister Mathias Conan moaning and groaning and making excuses for increasing government debt because of a loss of revenue due to falling prices for Aussie dirt I thanked god these imbeciles weren't governing the country when the GFC came knocking.

In the 2015 Budget, Mr Joe Sincerity's second attempt at balancing the nation's books has increased Australia's government spending and deficit to levels last seen in 2007. 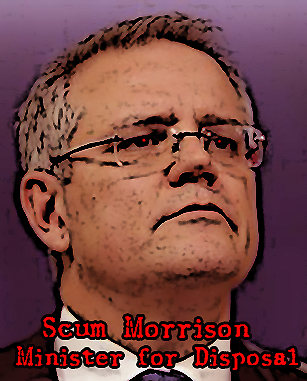 In other words, everything Abbott and his crapulant cronies have ever said about Australia's debt and deficit crisis were utter lies.

The current rhetoric surrounding the 2015 Budget is just more of the same shameless, gutless and gormless Fiberal humbug.

Oh, and when I say Fiberal I also mean that pimpled rump of a coalition partner without which the Fiberals could never form government at a federal level: the inept, in-bred and otherwise irrelevant Notionals, a minor party purportedly dedicated to improving the lives and livelihood of country and regional Australians. In fact, the Notionals represent the interest of Big Farmer and little else.

What remains major and unsustainable is Team Abbott's habitual lying.

For example, in his pathetic Budget speech last night, Joe Blow claimed that only the Fiberals would deliver tax cuts to small business when, in fact, the Fiberals blocked proposals by the previous Labor government to reduce corporate tax rates.

The first rule of Abb Club is: lie!

The second rule of Abb club is: lie about lying!

The third rule of Abb Club is: lie more! And smile!

This pack of incompetent spivs has an established track record. 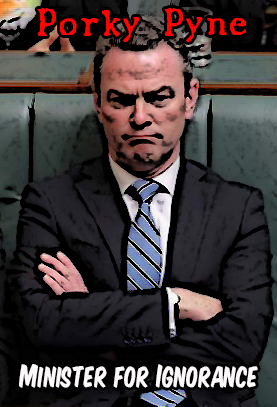 They lie. It's deliberate. It's planned. It's policy: http://www.abbottslies.com.au/

Even before Abbott defrauded his way into office, his Labor predecessor Kraven Rudd had established the nation's first AAA international credit rating while fending off a genuine economic disaster, one that ravaged markets and stalled governments on a global scale. In Australia, a million jobs were created, the lowest interest rates in our history were achieved, as well as low inflation, low taxes, a strong dollar, continued GDP growth and record investment.

For most smaller schools, new classrooms, halls and structural improvements were unimaginable until Rudd provided them through emergency spending measures to combat the Global Financial Crisis. The Labor government provided the funds, created the private sector jobs and kept the economy going here while overseas economies tanked.

Labor's economic strategy for Australia was hailed around the world.

Some countries have yet to recover from the GFC that Team Abbott still pretend never happened.

So, anything and everything Smokin' Joe, Scum Morrison or any other member of Team Abbott says, any proclamation, prediction or promise they make, is as reliable as a Chinese flash-light, crooked as a dogs leg and as rubbery as my dick after a big night out. 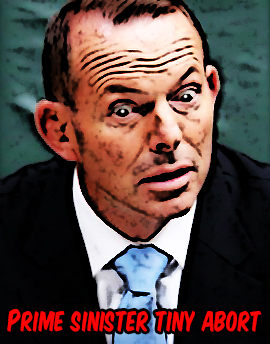 Another example: Oberfuhrer Morrison, among others of his rabid, rabbiting ilk, accuses Labor MPs of “opposing just for the sake of opposing”, a tactic he engaged in with wild-eyed enthusiasm as an hardcore Opposition member of Team Abbott's traitors, perjurers and evil-doers that did “whatever it takes” to disrupt and degrade the then Labor government.

In Opposition, Abbott suspended parliamentary standing orders so often I thought the bastard was on crack: 24 times in 2011, 43 times in 2012, and feck only knows how often prior to winning office in 2013.

The fact is, Tony Abbott seized power by doing just that: relentlessly opposing anything and everything the Labor government proposed

But here's my real point.

The “"kinder, gentler" Abbott Government is working against the interests of most Australians and must be stopped before the damage they are causing becomes entrenched and intergenerational.

Now that's what those pigfuckers really mean when they talk about “budget reform”.

Labor and the Independents must refuse to cooperate, negotiate or compromise. No deals. Not a single policy initiative or proposed act of parliament must succeed while the Abbott government exists. 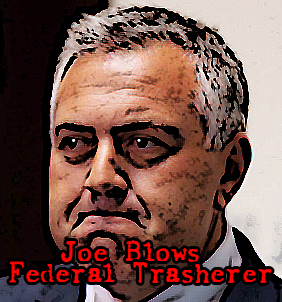 That, my friends, is the toxic seed Tony Abbott had sown with such gusto as Opposition Leader and it is definitely harvest time.

In reading his absolutely calm, considered, prepared, scripted budget speech Hockey's teary-eyed declaration that the best is yet to come made me spill my vodka spritzer but his closing “heart-felt” plea to Australians “to get out there and have a go” had me laughing so hard a little poo came out.

Gee, I guess the budget has been “fixed”!

Jee-zus H. Crisp, do these duplicitous ratbags really think anyone is still swallowing their bilge or that anyone imagines the latest display of Team Abbott's policy panic, wild lurching and back-peddling is anything other than opportunistic, politically expedient bullshit?

That's the smell of an early federal election in the wings.

Let's cut to the chase.

Last year Team Abbott warned Australians we would all have to “tighten ours belts”, contribute to some “heavy lifting” and say goodbye to an “age of entitlement”. This year Team Abbott urges us to cheer up, “get out there” and borrow and spend! 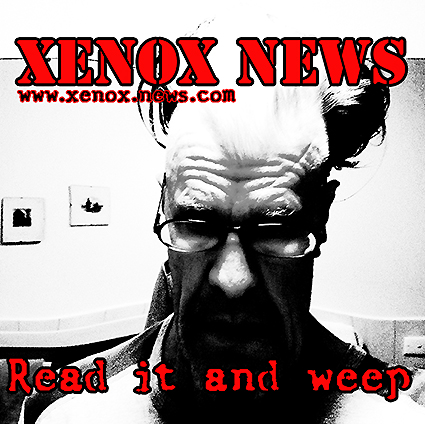 Pigfuckers, first and last, the lot of 'em.

The adults are in charge... somewhere on planet Earth, I guess.

In a muddled post-speech interview jolly Joe, glowing with incompetence and clearly itching to get outside for a pull on his cheroot, said “the buck stops here” but even he didn't seem to believe it.

Allow me to rephrase that for you, Joe: the fuck stops here!

This was Max Gross refluxing for Xenox News, where one's as good as another, where we know a hawk from a hand saw and where the vodka is always - ALWAYS - served straight from the freezer or not at all.

And that, my friends, is where the buck really stops. Cheers!

P.S. Onya Tones for keeping politics “off the front page” and for your “big taxing, big spending” government.

Lazlo, life does not have a reset button!

SMOOTH BETWEEN THE LEGS

Brisbane Rules at the Gabba

CONFUCIUS SAYS: DON'T BE AN ARSEHOLE