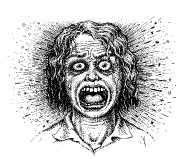 Australia's "Bring 'em on" moment. "If anyone thinks that this is going to diminish or undermine our resolve to support the Iraqi government in seeing the job through, then they are sadly misguided."
Aussie Defence Minister Nelson on Australian soldiers being hit by rocket fire in Baghdad.

Those Aussie diggers must be doing a magnificent job, because more and more Iraqi civilians are getting killed each day.

Listen you ponce Nelson how about dragging your sorry arse over to Baghdad and talking to the people outside the Green Zone about "the magnificent job" our diggers are doing.

The ones who are losing members of their family every day.
The ones whose homes are being raided and vandalized by the "Coalition of the Willing".
The ones who have no power and petrol after 3 years of inept American/British/Australian rule.

I will judge you by your actions not your weasel words; the invasion of Iraq is a fucking disaster which you and your 70 year old leader are directly responsible for.

You wouldn’t think it could have been possible, but you dickheads have made even Saddam’s rule look better.

SAY NO TO 70 YEAR OLD PM HOWARD’S WAR ON WANKING!

LOVE HER OR LEAVE HER - TALL TALES & TRUE