The Federal Liberal party is set to release a calendar inspired by members of the Australian Olympic team featuring a life size poster of Prime Minister John Howard with a fish dangling from his nob. The release of the calendar has been seen as an attempt to woo the countries many younger voters who've become disillusioned by old style politics.

"It's very sexy and very upbeat" said photographer Carl Shrimpton who distracts attention away from the models physical shortcomings with the aid of visual props.

"We've got Peter Costello wearing nothing but a fireman's helmet whilst posing suggestively with a hose and a naked Alexander Downer doing a handstand with a tulip shoved up his ass".

The calendar also makes a play for the all important environmental vote with one picture depicting a bikini clad Amanda Vanstone wallowing on the beach whilst Phillip Ruddoch makes a desperate effort to haul her back out to sea.

Shrimpton admits some egos were bruised during the shoot and he had to tread delicately particularly when photographing the spread for November which features Bronwyn Bishop with a potato sack over her head.

"She wasn't happy at first" he said, "but when I showed her the picture of Wilson Tuckey having sex with a chicken she soon realised it was for the good of the party." 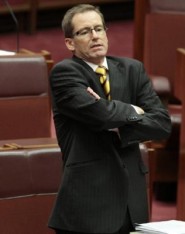 Meanwhile, back in Afghanistan...

Now something for the children and the deeply retarded