Some classic lines from the thinking person's favourite footy caller.
"The umpire's done himself a mischief"

"Scotty Cummings alone in the square, jumping up and down and waving his arms like they're playing My Sharona"

"Ugle playing on Peter Matera, fumbling around for the ball and probably his autograph book..."

"A couple of big touches from Clive Waterhouse, who was battling up until about 5 minutes ago, in danger of becoming Clive Waterboy."

Dermott: And the ball spills free to Kickett...
Cometti: Troy Cook you mean?
Dermott: Yes.. well, they do look rather alike.
Cometti: How so Dermott?
Dermott: (realising that it sounded racist.) Umm, well, they are both..er..
Cometti: ..Midfielders, yes Dermott.


After the Mcmanus/Wirrpunda clash a few derbies back. 'Shaun goes back to collect the ball, a free kick, and several teeth.'

Healy: Word is this guy is the most reliable kick for goal in the side. They say down at Collingwood if you had to have someone kicking for your life, Tarkyn Lockyer would be the man
Commetti: I'd prefer my mum
(silence)
Commetti: Not a great footballer, but at least she'd care.


"Ashley McIntosh, like a good hair spray...capable of a subtle hold"


"Barlow to Bateman, the Hawks are attacking alphabetically"


"Simon Cox, he prides himself on his disposal"
Cox then short passes to a teammate 15 metres away.
"Well, I could have done that".

"The Magpies ought to be kicking themselves right now, but with their luck, they'd probably miss."

"Bell bringing the ball out of the back line .....looking for wide runners.....passes to Walker...a contradiction in terms, really"

"The goal square's full of Bears, looks like we've got ourselves a convoy"

"Parker to Carr......sounds like a match made in heaven!"

After Lloyd gives Wakelin a little slap on ANZAC Day:
"Whoaa, there will be a duel at 5 oclock."

Dennis: "Dear shoots? Wait on the goal umpire? Behind. A wry smile there from the goal umpire, certainly a sense of the dramatic."
Don Scott: "He's the danger man, Dennis."
Dennis: "Who? The goal umpire?"
Don: "No, Dear. Paul Dear."
Dennis: "Brennan kicks out to the outer side, straight to Paul Dear - you're uncanny Don."

"It's a goal! A dream start for Hawthorn. Spider had both his legs taken out from under him - leaving only the other six to balance on....."

Stewart Dew kicks for goal early in the first: "He was brought here to do exactly that..(pause)...actaully 5 more than that, he kicks a behind."

DENNIS:"Whhhhoa CUMMINGS no it was almost a Modra like attempt we can see here in the replay"( As Cummings is in thee air slow motion)
DENNIS:"Modra,Modra,Modra..." (Cummings gets no where near the ball looking like
a clown) "CUMMINGS"

On former Magpie, Crow and now Cat, Brenton Sanderson: "He goes much better as a mammal"

On Corey McKernan's poor form: "He's like a long jumper who can't reach the sand."

"I love that surname Fixter. Sounds like something from a Batman movie -The
Fixter? But I digress..."

"There's talk of Karl Langdon offering his services to St Kilda, as if it wasn't bad enough being in 15th position"

Last night when Richmond kicked up the middle towards Ray Hall: "Richmond attack through the corridor in this case the Hall."


Tony Liberatore had just gone into a pack as he is wont to do and come out with blood gushing from his eye: "Libba went into the pack optimistically and came out misty optically."

Ball sails just over the line for a goal.
Dennis: That was absolutely wonderful!!
Jason Bennett: What was it Dennis? (obviously playing for the centimeter perfect line).
Dennis: Wonderful!! .............. Oh I missed my cue.


I think it was the Freo/Pies game last week and Dennis, after describing the second of 2 easy dropped marks says, "the Tale of Two Sitters".


Dermie: "Why do you suppose he went side on to take the mark?"
Dennis: "He probably was trying to impress the Russian judge."

"Almost a touch of synchronised swimming about that mark..... minus the peg..."

"If it was a set play, they copied it from a Portugese bus time-table"

Commetti: "Before this game, I would have bet the mortgage on the Western Bulldogs, but I guess this shows that I may join the ranks of the
homeless"...
They (Lyon, Brereton Commetti) were joking that Dennis would now be living out of a cardboard box .....
Kris Barlow Having a shot on goal
Cometti: "Well you could bet your house .... Ohhh"
Barlow misses ....
G.Lyon "You just lost your cardboard"

"Great stuff by Caracella - moments before McIntosh had treated him like a rent-a- car".

"There is no footy god - only a footy accountant!"

Rich vs Ess, the ball is passed to Hille of Essendon, with Rodan trying to spoil.
"He gave it his best, but that is a big hill to climb 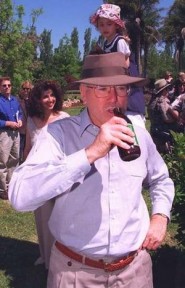