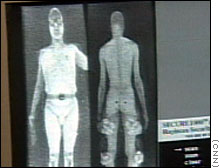 Several customs officers had to be sedated as the new passenger scanning devices were rolled out into US airports this week. "They were just getting too excited" an airport official said in a press release. Neuters, previously looked upon as dubious as potential employees, are rejoicing as airport customs recruiting agencies announced in job adverts that sexual dysfunction would be highly regarded. One recruiting agent said yesterday that "If we can get workers who can do their job without standing around in awkward positions and continually adjusting their trousers we would see it as an advantage. Frothing at the mouth has also been a problem".

If you want to live a happy life, tie it to a goal, not to people or things.