Home  Travel  Times and Places  THIS BLOKE IN OUR DREAMS

THIS BLOKE IN OUR DREAMS

The story is that there is this bloke who is appearing in people's dreams worldwide.

I haven't spotted him yet but I must say that I am dreaming more now than before...

In one recent dream I was standing near to an explosion but I was somehow shielded from the direct effects of the blast. It had some effect on my body though, as I awoke with my left arm deadened. I couldn't lift it; 'twas as limp as a florida willow. Gradually feeling returned...

Due to the dream blast seeping into the real world? Perhaps.

This is the guy

As the days draw on he is creeping closer. 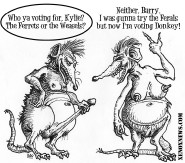 We are all Winston Smith