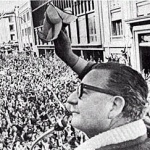 It was a clear sunny day. People went innocently about their business. Without warning, death plunged from the sky. Screaming aircraft shattered the building, sowing cruel death, injury and horror.

No amount of idealism can justify these savage attacks on innocent people, which can only be condoned by deranged fanatics.

On September 11 1973 the government of Chile was destroyed in a terrorist assault on the Presidential Palace.

The democratically elected Socialist President Salvador Allende was killed, among many, many others, then and there, and in the years to come.

This unilateral act of terrorism was ordered by US President Nixon and sponsored by the U.S. Central Intelligence Agency.

It was US government policy to depose Allende and install General Augusto Pinochet, no matter what.

Today Pinochet, that obscene old monster accused of more than 3,000 deaths, is still being protected from prosecution by his US minders. No wonder the US fears an independent International Criminal Court.

In helping murder Allende and democracy in Chile, the USA gave birth to a brutal regime that used systematic terror at home and abroad to hang on to power for almost seventeen years.

This, however, was just one of many similar terrorist incursions by the CIA throughout Central and South America in the last three decades. Remember Cuba, Guatemala, El Salvador, Grenada, Colombia, Peru, Chile... Yet these US-led attacks on sovereign states at least reached the pages of the international press. Others didn't.

And the US continues to act with impunity, disregarding world opinion, flaunting its aggression, avarice and military might.

Declassified US government documents now prove that after Allende's election in September 1970, that poisonous old reprobate Henry Kissinger approved a CIA plot to prevent Allende's inauguration. This US conspiracy led to the assassination of General Rene Schneider over a month later, who as commander in chief of the Chilean army, had insisted on upholding the will of Chilean voters and the country's constitution to have Allende inaugurated.

What was that again about US objections to an International Criminal Court?

Allende's right-wing opponents and the Chilean secret police, sponsored by the CIA, went on to carry out numerous international terrorist operations.

On September 30, 1974, retired General Carlos Pratts, who Pinochet replaced as head of the Chilean military shortly before the 1973 coup, was killed by a car bomb while living in exile in Buenos Aires, Argentina. In Rome in 1975, operatives attacked and seriously maimed Chilean Christian Democratic politician Bernardo Leighton and his wife.

Subsequently, Chilean and Argentine military units assisted the vicious dictator Anastasio Somoza in Nicaragua and helped set up death squads in El Salvador. Argentine units also aided and supervised Honduran military death squads that began operating in the early 1980s, all with the direct assistance and collaboration of the CIA.

Terrorism, torture, mass murder, all with the US government seal of approval.

Osama bin Laden, the Saudi 'tall man' of terrorism believed responsible for the 2001 attacks on the US, became involved in militant Islamic activities when he went to Afghanistan in the 1980s to fight with the Mujahidin against the Soviet-backed regime there.

As we now know, the Mujahidin were supplied and trained by Saudi Arabia, Pakistan AND THE USA. 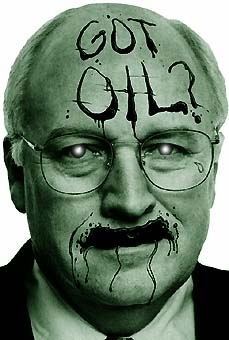 Even back in the 1980s everyone knew that many of those fighting the Soviets and the Afghan government were complete nutters, religious lunatics who had no loyalty to their US sponsors, let alone to purported 'American values' like democracy, religious tolerance and gender equality.

The worst, most radical and fundamentalist sector of the Mujahidin, the mad Taliban, gained control of most of the country by the late 1990s.

Some Taliban leaders openly acknowledged that they allowed Osama to operate there because they felt indebted to a man who assisted their rise to power.

As we now know, the US government is intricately involved in the creation of international terrorist networks.

And guess who was director of the CIA when the agency worked with many of these terrorist networks? That's right, US President Dumbass's daddy: George Bush Sr.

Meanwhile, back in Afghanistan, the crackpot Taliban regime has been destroyed, thousands of innocent Afganis have died in US bombings and shootings, and Osama's crazy playmates have scattered god knows where.

As for the mass graves near Shebergan prison, where many of the Taliban fighters who surrendered after the fall of Mazar-e-Sharif and Kunduz were incarcerated, don't hold your breath for a seriously investigation by US authorities, who were after all in charge.

There's initial evidence of a massacre by Northern Alliance forces loyal to wily old General Abdul Rashid Dostum - the good guys! - but our American friends, once again, have other concerns. The silence is deafening.

Raise another cheer (jeer?) for the ICC.

And what of our own PM, the Mendacious Midget, and his sabre-rattling political pipsqueaks?

There is genuine bewilderment in Kabul over Australia's treatment of asylum seekers.

In particular, Afghan authorities cannot comprehend the reason for massive funds being spent on border protection and the so-called 'Pacific solution', and the concentration camps for those who cannot establish that they have been persecuted.

The Mendacious Midget's bloody-minded determination to return rejected Afghans to Afghanistan is a growing source of antagonism towards Australia from officials in international aid agencies and among senior officials in the struggling transitional government.

In May 2002, Immigration Minister Philip Cadaver paid one-day visit to Kabul to sign a 'memorandum of understanding' with the transitional government and to examine an Australian-funded 'retraining centre' under construction.

The Ghost Who Walks left Government officials wondering whether Australia's only interest in Afghanistan was the return of detainees imprisoned in the desert and on Pacific islands.

The Cadaver actually cut short a top-level security briefing prepared by senior UN security staff before catching his plane back to Australia to announce that it was 'safe' for Afghans to return.

There's no place like home, even with no food, water or infrastructure, and untold numbers of unexploded ordnance lying around for the kids to play with.

Not to mention more than a few dissatisfied, trigger-happy Afghan warlords still anxious to get their share of war spoils. Just ask the US puppet President Khazai, who almost got his head blown off the other day.

Oh, and I almost forgot: Osama bin Laden and his al-Qaeda gang of religious fanatics.

Anyone for a holiday in Afghanistan?

On September 11 2001, perhaps the USA finally learned what the term 'blowback' means.

Given, President Dumbass Bush's ongoing bizarre rants regarding Iraq, it has obviously learned little else.

If the Simpleton of international affairs and his oily minders get away with it, looks like we're all in for a religious/race-based global war that will make the horrendous dropping of New York's Twin Towers seem like the pop of a party favour.

And our very own moral gimp of a Prime Miniature, the Mendacious Midget, is wondering if there's enough Aussie khaki to go around.

This was Max Gross for Xenox News. May we all rest in peace.