Wednesday, 31 May 2006 By Mr_Jupiter
Renewed investigation into the mass murder of Iraqi civilians by U.S. marines in Haditha once again turns the spotlight on those with the ultimate responsibility for these ongoing atrocities. 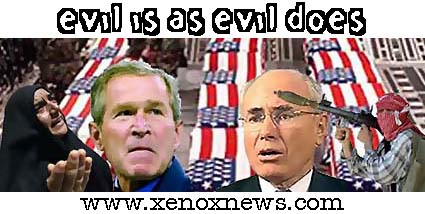 Initially covered-up by the military, the outcry and outrage is increasing as eyewitnesses come forward to tell the real story of how, for several hours, U.S. troops sought out and murdered innocent bystanders after a roadside explosion killed a marine.

Two dozen or more Iraqis were killed at point-blank range, most in their own homes, some in their beds. Women and children were not spared.

Charges of murder, dereliction of duty and making false statements will be brought against several marines.

When then will the U.S. President and Vice President, the Secretary of Defence and other prime movers of the illegal U.S. invasion of Iraq be arrested o­n those same charges?

After all, if not for the Bush administration, this page would be blank.