I've just flown into Baghdad. Here let me tell you why we are in Iraq... A broken man on a street corner, his family slaughtered by Saddam and his cronies:
"All my life I have desired freedom and when I get it others come to snatch it away"
The cab driver:
"We had so much hope when the US and the coalition came, but now others have come to destroy it..."

Thats right. Voices of the people of Baghdad. Battered and confused by the terror of the last month. Who is behind it? Why are they doing it? Why are they indiscriminately blowing Iraqi lives away?

Unfortunately Osama and his mindless minions have decided to make a last stand here. Boosted by the inanities of the "leftist intelligentisia" safely ensconced in their latte sipping suburbs, Al qaeda has moved in to destroy Iraq's last best hope for freedom: democracy courtesy of the brave coalition forces.

And if we leave what then? Another failed Taliban state? Another reason to hate the west?

No. By standing tall. By finishing the job the coalition of the willing can make a difference; in fact they can win the war on terror in one fell swoop.

They must not cut and run!

If he wrote it he could get rid of it. He had gotten rid of many things by writing them. 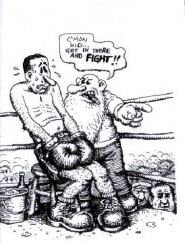 No Care, No Responsibility: Superb Job!