Home  Artist  A Biography of Life  100 YEARS OF WAR! Celebrating the Centenary of World War One

In our special series on the centenary of World War One, the War to End all Wars, XenoxNews.com will tell you the stories the others keep hidden. That’s because unlike the pathetic patriotic claptrap dished up by the lamestream media, XenoxNews.com scribes have actually been working. They have been researching the role played by all the nations involved, not just the usual players. The stories they have uncovered will amaze you. Tales of apparitions, spiritual visitations, and just the plain old bizarre. Stories about the events and people that really happened during the First World War, and shaped the world we live in today...

American involvement in World War One was short and, in terms of actual fighting, very small. But their psychological impact was huge. In fact, once he heard the Yanks had joined the fight the Kaiser fled to Holland. That's how shit scared he was! 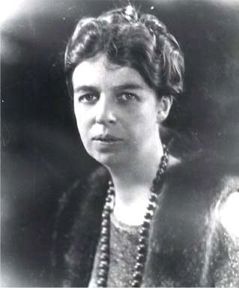 But the Yanks were fighting long enough to have one famous visitor; Eleanor Roosevelt. The neice of former US President Teddy Roosevelt and future First Lady to President FDR. The tale of her trip to the battlefields of France has long been hidden but XenoxNews has done the research, and can now tell you the full story about Eleanor and the Doughboys...

You know it is amazing. Nowadays the Roosevelts are held up as some sort of hero Yank family. But in fact they were as in-bred as Georgia's Clayton hillbillies...

"Ol' granpappy Teddy told me that if a man was truly honest he would only fuck his sister and marry his cousin. 'Keep it in the family Godamnit!', he used to say. Well our family certainly held these values to be true. And it didn't do us any harm! I may be blind and have a gimp leg, but look now; my cousin and his cousin are the President and First Lady of our great nation." Tom Roosevelt-Vanderbilt, 1933.

One of the Roosevelts most famous scions was Eleanor. She was President Teddy's niece, and distantly related to the Tree of Jesse via her mother. Eleanor was a free spirited girl, which can largely be attributed to her education at the notorious Virginia Woolf School for Girls in London. After finishing her 'education' there she returned back to the US wide eyed with the latest suffragette nonsense of the time, and with a life long interest in the sensual arts. However outside events soon intruded upon her carefree life as the War to End All Wars began. Initially the Yanks were happy to sit this one out and profit by selling weapons to both sides. But after the Germans dastardly plot to bribe Mexico to invade Texas in 1917 was uncovered, they decided to throw their lot in with the Allies. The then President, Woodrow Wilson, quickly whipped up an army of conscripts and sent them off to France. It was here that Eleanor saw her chance. What better way to climb up the political tree then by volunteering as a female adjunct to the US Army? It would be ideal she thought. So after much cajoling of her former President Uncle and his General mates, she was allowed in.

Eleanor came to France in the spring of 1918. She had a bounce in her step, and a twinkle in her eye when she stepped on to the platform at Gare du Nord in Paris. Now there, her plan was to visit these new heroes of America and boost their morale with some speeches and feminine charm. As well, she wanted to shack up in the Ritz Hotel in Paris and blow off some steam. Eleanor style... 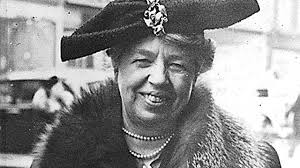 ...soon Eleanor's boudoir at the Ritz became a magnet for every pevert and opium fiend in the US army.

It wasn't long before Eleanor forgot about her original reasons for her French sojourn. In fact, secret Government reports that we have our hands on say she went hog wild in that pevert Disneyland of Paris 1918. Maybe it was her 'Roosevelt' upbringing, or some inbred genetic trait, but the stay in Paris unleashed a perversion and decadence that fluorished in her Hotel room. The word quickly spread amongst the American doughboys, and soon Eleanor's boudoir at the Ritz became a magnet for every pervert and opium fiend in the US army.

World War One Facts: Eleanor wasn't afraid of experimentation... nurses...Drs...enemas...new drugs... She tried them all in a frenzy of youthful abandonment. It was said that she invented the 69 when she caught a dimunitive doughboy's head between her knees and stood up.

One night there was a particularly raucous gathering. Even some of the boys of the US 93rd Division had dropped by. The bidet was full to the brim with Dom Perignon, and Eleanor was seen to lead US Commander in Chief "Black Jack" Pershing naked on a leash to drink from it on his knees! At one stage a topless Eleanor leaned out the Ritz window and squealed delightfully: "Why everything this Doughboy does is wrong!"

However the fun could not last for ever, and soon news of her outrageous antics started to reach the corridors of power. In Washington DC questions were raised about her behaviour to President Wilson, while the leaders of the Allies also grew distrustful. In particular French leader Clemenceau was worried about the spread of a new virulent pox. ‘What if Eleanor’s gangbangs started to infect the doughboys?’ he told his English counterpart PM Lloyd George, ‘It might render them useless for the upcoming Hindenburg offensive...’

Quote from Sergent Elmer Ricardovitz, US Doughboy: "She was no great beauty, but she had that hangdog sexiness that drove a Georgia boy like me wild. She was not too shy to share herself around either. But to only us good old doughboys...wouldn't touch a Frenchman or Englisher with a barge pole. Of all the other hodgepodge of nationalities there she reserved a special scorn for the Australians. 'Drunken uncouths' she called them..."

Finally Wilson decided it would be best that Eleanor return to the States. At first she was stubborn, and wanted to cling on to her gay Paris life. But, after a last night of schnapps and hair pie, her girlfriend Mata Hari convinced her that it was better to go back. Said Mata: ‘You can now return and build on the new connections you have made in Paris with the future perverted leaders of the USA and Illuminati.’

And so she did. Eleanor returned home and settled down. She married her cousin, and though she didn’t follow her husband directly into politics, she was soon involved in many different political activities. But she always remembered her time in Paris during World War One with great fondness. As did many of the Doughboys who made her acquaintance ;)