That pevert Winston Churchill and his naked beach frolics

I have detailed previously Winston Churchill's secret life as a sex fiend and cigar chomping gangster.

Now I can exclusively reveal another perverted penchant this terrible tyrant had:
Nude Bathing!

Unknown to the rest of the world, Winnie spent most of World War 2 as far away from the action as he could get. Usually this meant shacking up with his good friends the disgraced former King Edward and his misanthropic wife Wallis Simpson on the Florida coast in one of their mansions. From here he would laze about and occasionally recite scripts written by others for broadcast back in England.

Often, after an afternoon of cigars and brandy, the buffoon would wander down to the beach. There, pissed as a fart, he would remove his clothes and bathe totally naked. The sight of this scion of English Imperial rule naked on Florida’s beach was such a scandal that it was deemed a state secret and kept silent for 60 years. However for the poor people on the beach at the time of Winnie’s wanderings there was nowhere to hide, and many a child had nightmares from the sight of his enormous tossil.

There you have it. This pinnacle of western civilisation, the hero of Anglo-Saxon dimwits everywhere, would wander the beaches of Florida naked and in a drunken haze and oblivious to the sacrifices he demanded others make for his glory.

What more proof do you need? 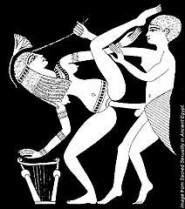