Created: Wednesday, 29 May 2002 Written by Alex_Hydell

NO CELEBRATION OR GET BOMBED!
Authorities in eastern Afghanistan are urging people not to fire guns in the traditional manner of celebrating marriages.

Why? Because it attracts U.S. bomb strikes! In the latest incident, U.S. bombers hit a convoy of wedding guests, severely wounding four.

Last week, U.S. warplanes killed 10 people at a wedding in a village north of Khost after a U.S. helicopter identified fire coming from the ground.

Coalition officials have dismissed as "terrorist propaganda" claims that wedding parties were attacked.

"Listen, pal", Major Buzz Analretentivasshol told cowed reporters. "If we kill anyone anytime anywhere, it means they're terrorists, got it? If they WEREN'T terrorists, we wouldn't have reduced them to shit-on-shingle, would we! I mean, Jee-hosaphat! We're not monsters!"

The governor of Khost has begged U.S. forces to cordinate with local authorities before launching attacks.

"Holy shit!" the Major elaborated. "Didn't I just say that! We COORDINATED the goddamn terrorists!"

"But it was a wedding," protested one brave journalist. "They were civilians!"

"Goddamn it, all gooks - I mean, all ragheads look alike, don't you know that?

"And by the way, pal, you look kinda suspicious yourself..." 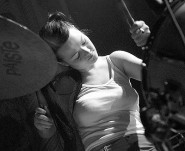