Home  Life and Style  Philosophy  If you want to make a stand against it all.

Make a stand against these crony capitalists. Support the Iraqi freedom fighters!
Strike a blow against invasion forced privatization!
The IMF backed crony capitalist fantasy must be stopped at Baghdad and repulsed.

This war against terrorism is a farce. It's a war for big business. For rampant capitalism at its worst.
"Lets invade Iraq and then privatize its oil industry - to us!"

They lit the fuse. Now lets blow it up in their fucking faces. They don't want freedom. They want more power. Democracy? What a fucking joke. Now is the time to strike back. They want World War 3? Lets fucking give it to them!

The arseholes in Washington know what's at stake. Do you?

And look at the minions lining up to back them; Blair and that full time ass licker lil Johnny.
Well let's fight back now!
The Yanks are in Iraq and a stuck like a bunny in the headlights. Now is the time to hit these motherfuckers hard!
They want to rule the world? Well they gotta conquer it first; and, fuck it, let's be on the frontline for stopping that hick from Texas from spreading his form of crony capitalism over the world.
Join the Brigade of Freedom and head to Baghdad to kick Yank ass!

What have you got to lose? 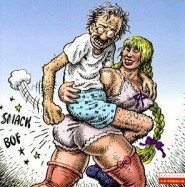 This Vicious Rogue State Must Go!

Happy Birthday! Many Happy Returns to the A-Bomb