SCHAPELLE CORBY IS THE NEW WIKILEAKS

Three years of research. Classified information. Undercover operations. This is The Expendable Project.

An international research team, Hidden World Research, has probed everything. They planned to release their work next year, but Schapelle Corby's suicide bid has changed everything. It is now set to roll immediately.

The expendable website was launched yesterday, with a video clip mapping the release schedule. It can be viewed here:
http://www.expendable.tv 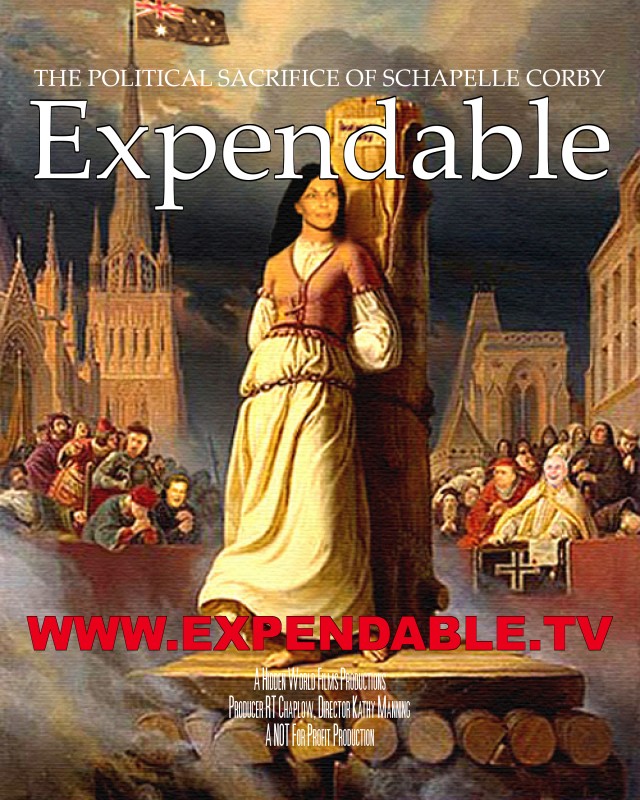 A snap was shown on Seven News, but without an explanation of what it is really about. What it is really about is showing how little human life matters to ruthless politicians. How self interest will drive them to sell anyone. How they are capable of selling a life to hide domestic corruption.

It is about releasing their own cables to damn the guilty of Canberra. Showing the world the correspondence and documents of those who pretend to represent YOU.

The project's own media release is copied below. The Expendable Project could be a turning point for Australia. SchapelleGate could be WaterGate. How will Australia deal with the brutal truth?

The Hidden World Research Group was recently notified, by a reliable prison source, that Schapelle Corby had overdosed in her Kerobokan cell. One of our teams investigated this incident further, and established its accuracy through a second independent source.

The incident occurred just prior to her birthday, on 10th July. Ms Corby obtained the key to a cupboard in which her medicines were stored, and consumed over a weeks supply in a single dose.

Her cellmates did not report this initially, due to apprehension and fear, and she remained untreated on her cell floor. Whilst she survived the overdose itself, she was left without her essential psychotic medications, and consequently, her mental condition deteriorated rapidly.

Her sister, Mercedes Corby, discovered her in a highly distressed and delusional state on her subsequent visit, some days later. She immediately began the lengthy and difficult process of stabilizing her.

At no stage was she allowed to receive the urgent hospital treatment her condition required. It is not known what long term damage the excessive dose may have caused.

Subsequent medical opinion, obtained by the Hidden World Research Group, stated that this was almost certainly a serious suicide attempt. We passed the information on to the Australian government through several intermediaries.

However, as far as we have been able to establish, the government has taken no steps to assist Schapelle Corby, or her family. Furthermore, she has not been transferred to the medical facility that her condition certainly warrants.

THE EXPENDABLE PROJECT
Given the serious nature of this development, the Hidden World Research Group, and Hidden World Films, have taken the decision to release the project six months ahead of the original schedule. This will now be released over the coming weeks.

For further details, and to view the project trailer, please visit The Expendable Project website.

So I told him, you know, that, er, the reason I was going so fast was that I had, er, I had a, er, metallic penis and that, there was, there was a magnet on the urinal which drew me towards it at an unnatural speed.

The Daze of Wine and Coronavirus