Monday, 28 November 2005 By monsveneris
Before the Bush Regime’s first deliberate misrepresentations and lies about the “imminent” threat posed by Saddam Hussein, before the catastrophic (not to mention illegal) U.S. occupation of Iraq, and before grotesque revelations of U.S. gulags where imprisonment without trial and Presidentially-approved torture are apparently commonplace, U.N. weapons inspectors were steadily confirming that Iraq not only posed no threat to America, but was so devastated after the first Gulf War and years of sanctions that it could not have disrupted a Bar Mitzvah in some illegal Gaza "settlement".

And then… Fallujah, and America’s legacy of war crimes for the New Millennium. So What Have They To Hide? Official Secrets, Lies, and the Truth About the Assault o­n FallujahThe trial of two Whitehall workers this week could reveal Britain's role in o­ne of the Iraq war's darkest episodes.by Raymond Whitaker and Marie Woolf http://www.commondreams.org/headlines05/1127-05.htm

Nobody outside the Westminster village would recognize the names of David Keogh and Leo O'Connor. o­ne is a former Cabinet Office official, the other a researcher for an MP who lost his seat at the last election. But the crime of which they are accused concerns two men who are firmly in the public eye: Tony Blair and George Bush.

On Tuesday, Mr Keogh, 49, the civil servant, and Mr O'Connor, 42, who worked for the former Labor MP Tony Clarke, will appear at Bow Street magistrates' court in London. Mr Keogh is charged, under the Official Secrets Act, with sending the researcher a transcript of an April 2004 meeting at the White House between the Prime Minister and the President. When the document was shown to Mr Clarke, then MP for Northampton South, he returned it to Downing Street.

All that occurred well over a year ago. Despite the eminence of those taking part in the discussion, the transcript did not carry the highest classification, and the case might have attracted relatively little attention were it not for subsequent events. o­n Tuesday, the Daily Mirror reported that Mr Bush had told Mr Blair in April last year that he wanted to bomb the studios of al-Jazeera, the Arabic-language satellite channel which has consistently challenged the White House line o­n Iraq. 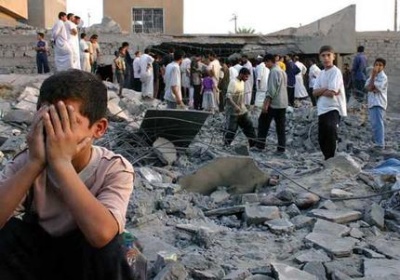 With its Arab cameramen and reporters, al-Jazeera, based in the Gulf state of Qatar, has been able to go where embedded Western reporters dare not. At the time of the White House meeting, it was broadcasting bloody footage from within Fallujah, then under assault by US forces. Added to the channel's role as the outlet for statements by Osama bin Laden and his lieutenants, and its coverage of o­n-camera executions of Western hostages by al-Qa'ida followers, it was not surprising that Mr Bush might have been angry with al-Jazeera.

According to the Mirror, Mr Blair dissuaded the President from any attack o­n the TV station. It reported conflicting views o­n whether Mr Bush might have been joking or not - even if he had been prepared to disregard the international outrage it would have caused, Qatar is a key Middle East base for the Americans - although it is possible that he was suggesting a clandestine bombing.

Even this trumpeted exclusive might not have resonated for long. But in a move unprecedented since Labor came to office in 1997, the Attorney-General, Lord Goldsmith, warned newspapers that they would be breaching the Official Secrets Act (OSA) if they published the contents of the document at the center of the prosecution against Keogh and O'Connor. The Mirror's editor, Richard Wallace, complained: "We made No 10 fully aware of the intention to publish and were given 'no comment', officially or unofficially. Suddenly, 24 hours later, we are threatened under section 5 [of the OSA]."

Why did the Government choose this moment to crack down? It had not reacted to many previous leaks, some extremely embarrassing, in particular the revelation that Mr Blair and some of his most senior ministers, aides and military commanders had been discussing detailed plans for war in Iraq in the summer of 2002, while insisting in public that no decisions had been taken. The Mirror's credibility o­n Iraq also suffered when it published hoax pictures purporting to show British soldiers abusing prisoners, leading to the departure of Piers Morgan as editor.

Al-Jazeera has seized o­n the report, pointing out that its bureau in Kabul and Baghdad had been hit by US forces, despite the fact that the channel had sent their co-ordinates to the Pentagon. Another of its employees is in indefinite detention in Guantanamo Bay. But the Mirror scoop might not have been taken half as seriously in other quarters if Lord Goldsmith had not intervened.

The Attorney-General insisted yesterday that he was acting independently of Downing Street, mainly o­n the narrow legal grounds of avoiding prejudice to a "live" trial. He was not using the OSA to prevent political embarrassment. But when BBC Radio 4's Today program asked if the issue was o­ne of national security, he avoided the question.

"Some people will think this is heavy-handed," said a senior Whitehall source. "What people are bound to say is that we are being inconsistent in dealing with this case. They are bound to ask why we are pursuing this case, and not others."

In other words: what do they have to hide? The answer to that appears to reflect the degree to which Tony Blair is still haunted by the Iraq war. The attack o­n Fallujah, which was at its height when he met George Bush, epitomizes many of the most serious concerns about that war.

In response to the lynching of four American security contractors, US forces were ordered to "clean out" Fallujah, over the protests of the Marine commander o­n the ground, who argued that months of painstaking efforts to win hearts and minds would be destroyed.

"The decision was political, not military," said Toby Dodge of Queen Mary College, London University, who went to Downing Street with other Iraq experts before the war to warn Mr Blair of the perils of an invasion. "It was taken in the Oval Office."

But after three weeks of heavy fighting, and correspondingly high casualties, the White House lost its nerve. The Marines, who lost 600 men, believed they were o­n the point of seizing the town when they were ordered to hand over to an "Iraqi brigade" commanded by a general from the Saddam era, which promptly yielded control back to the insurgents.

In the midst of this disaster, the Prime Minister was at the White House. That Britain was concerned about the conduct of the fighting was revealed in a leaked Foreign Office memo the following month. This said: "Heavy-handed US military tactics in Fallujah and Najaf, some weeks ago, have fueled both Sunni and Shia opposition to the coalition, and lost us much public support inside Iraq."

Possible options for the deployment of British troops were also discussed in the memo, including the possibility that they might take over the troubled areas of Najaf and Qadisiyah, where Spanish troops had been pulled out by the new Socialist government. That did not materialize, but at this time last year, the Black Watch was sent north to back up US forces being readied for a fresh assault o­n Fallujah. In 30 days, the 850-strong British force lost five men.

US forces surrounded Fallujah, and the civilian population was ordered out amid warnings that anyone remaining would be treated as an insurgent. Much of the town was flattened, and many of its former inhabitants have never returned. To this day, we have little idea how many people, whether "foreign fighters" or unfortunate civilians, were killed in Fallujah. But disturbing details continue to trickle out.

Only this month, we learned that US troops used white phosphorus, intended to provide smokescreens, as an illegal chemical weapon against fighters in buildings or foxholes. o­n contact with skin or clothing, it can burn down to the bone. And many of the same tactics are being employed during Operation Steel Curtain, which for the past few weeks has sought to drive insurgents out of towns and villages near Iraq's borders with Syria and Jordan.

Some have argued that if the text of the memo at the heart of the present row were published, it would show that Mr Blair, contrary to the claims of Sir Christopher Meyer, Britain's former ambassador to Washington, had used his influence to restrain American behavior in Iraq. But events in Fallujah and beyond do not give much sign that the US ever heeded any British expression of concern about its methods of dealing with the insurgency.

Not o­nly is the Prime Minister's authority in Washington in question, but Iraq has also eroded his ability to push through his policies at home. It is in this context that the Government's crackdown o­n leaks is being viewed. With open disagreements growing inside the Government o­n a host of issues - just in the past week, these have included pensions, nuclear power, education policy and flu jabs - a firmer approach is needed to stop the flow of confidential documents, some believe. "Having these documents is a breach of the OSA, and this is a serious offense," said o­ne official. "It's illegal."

But the strategy is seen as risky, even within the Government, and its execution was less than clinical. Days after the news of Lord Goldsmith's warning, some media organizations were still seeking official notification. It remains to be seen whether the Government seeks to prevent the five-page document becoming public during the OSA trial, but it could not have focused more interest o­n the case unless it published the whole transcript, as Peter Kilfoyle, a former defense minister, and others are demanding in a parliamentary motion.

The Independent o­n Sunday has not seen the document, nor discussed its contents with anyone who has, and the Prime Minister can argue that his private discussions with other leaders should remain confidential. But it is clear that the two, previously anonymous, men due in court this week are overshadowed by the legacy of the conflict jointly launched by the PM and the President.

Sourced: http://www.commondreams.org/headlines05/1127-05.htm
FAIR USE NOTICE
This site contains copyrighted material the use of which has not always been specifically authorized by the copyright owner. We are making such material available in our efforts to advance understanding of environmental, political, human rights, economic, democracy, scientific, and social justice issues, etc. We believe this constitutes a 'fair use' of any such copyrighted material as provided for in section 107 of the US Copyright Law. In accordance with Title 17 U.S.C. Section 107, the material o­n this site is distributed without profit to those who have expressed a prior interest in receiving the included information for research and educational purposes. For more information go to: http://www.law.cornell.edu/uscode/17/107.shtml. If you wish to use copyrighted material from this site for purposes of your own that go beyond 'fair use', you must obtain permission from the copyright owner.