Home  Local  Philip Ruddock: Give that man an exit bag

Philip Ruddock: Give that man an exit bag

Friday, 06 September 2002 By Correspondent
Who among you, especially in your younger days, can honestly say that you never fudged your résumé to get a job? Or embellished your experience in face to face interviews with prospective employers. Once established with a work history--your credentials as a harnessed servant of the work ethic--you were able to dispense with the lies. Unless, of course, you were entering the shady realm of big business, where the lies metastasised over time to become a grotesque perversion of truth and you believed your own fabrications. Enter Hazari refugee Ali Bakhtiyari and his less than truthful details of origin. No, he wasn't applying for that plum position as a minimum wage employee driving a fork lift in some warehouse, or the sniggering CEO of a privatised bank. He was trying to save his and his family's skin. He did what he had to do.

In other words the lies which are a foundation of the capitalist system are pilloried when it comes to saving lives.

As a letter writer to The Age said: "Like the PM, he [Bakhtiyari] believes in core and non-core truths."

Enter Heil Ruddock, Australia's modern day Inspector Javert. Like Javert, Ruddock's sole mission is to hunt down, prosecute and, in his case, deport desperate people. Hiding behind a law based on technicalities that would have fit snugly with Hitler's Third Reich, Ruddock exudes smug certainty in his bloodless task.

With the revelation that Bakhtiyari lied about his origins, many Australians who were beginning to weaken as supporters of Ruddock's crimes against humanity, will once again lift their eyes from the shame they were experiencing and stand tall, their right arms outstretched in obeisance to intolerance.

One look at Ali Bakhtiyari's face and it is more than obvious that this man is an Afghan, no matter where or for how long he lived in Pakistan or Iran.

That his courage in trying to save his family from the horrors of persecution is now seen by a majority of Australians as a negative human trait, shows to what depths of moral turpitude this government has sunk. And they are taking this once proud nation all the way down with them.

We can only hope that, like Javert, Ruddock eventually comes to terms with his inhumanity and commits suicide.

More of Hark's barks at http://members.optushome.com.au/thesquiz/scatt.htm 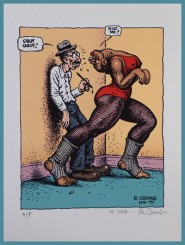