XenoxNews has just gotten wind of a new movie being rushed into production based on the tragic story of Schapelle Corby. It is said to have the whole hearted backing of the Australian film industry and many of Australia’s finest actors are rushing home to be part of this film.


Story Synopsis:
The story of Schapelle starts with her arrival in Bali and her subsequent framing by the Indonesian Police for drug possession. Follow all the twists and turns of her court case as Schapelle and her family stand up against a corrupt legal system. See the devastating verdict as the uncaring and sinister Indonesian judges contrive to find poor Schapelle guilty. Imprisoned in the hell of an Indonesian jail, she is racially abused and assaulted by the evil prison guards. In a steamy encounter, Schapelle breaks down and takes comfort on her sister Mercedes bosom and a bit of girl-on-girl action ensues.

As all Aussies rise as one against the guilty verdict, tyrannical Indonesian PM Yudieyoyo (Gary Oldman) decides that Schapelle will be sentenced to death as punishment to Australia for refusing to give anymore money to the Tsunami appeal. Finally, 70 year old Aussie PM John Howard (Bud Tingwell) authorises the use of the SAS to Free Schapelle! With seconds to spare Schapelle is winched to safety from in front of the firing squad by the dashing helicopter flying Aussie SAS man Lt Thompson. Schapelle renounces her lesbianism, recovers her Christianity, and flies off into a beautiful Bali sunset with Lt Thompson.

This movie is set to be another Aussie classic like Alvin Purple and Ned Kelly Rides Again. Of course we welcome all XenoxNews readers to send in their alternative plotlines for what will surely be a film to unite all of Australia! 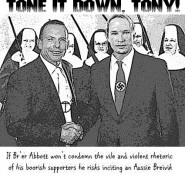 SILVER SPOTS BOILED IN FRONT OF MY EYES

THE PEOPLE HAVE SPOKEN. NOW IT'S TIME FOR THE TERRORISTS TO RUN!