"Like most Americans, I see the images of violence and bloodshed. Every picture is horrifying and the suffering is real. It is worth it."

So prattled the delusional U.S. President George W. Bush in a rare, primetime TV speech that compounded his status as an ignoramus, a fraud, and a criminal.

Conspiring in the White House with his gang of voracious corporate sociopaths, the greatest danger to global stability clings to his unraveling web of lies, while grim reality rolls on in Iraq… and Iran. Iranian Revolution Is Thriving in Iraq
by Robert Scheer
Published on June 28, 2005 by the Los Angeles Times

Did those wily ayatollahs give us the purple finger again? It sure looks like it after the smashing defeat Iran's religious fanatics dealt reformers in the presidential election Friday.

It was a replay of the election in Iraq, in which candidates groomed by Tehran's theocracy herded loyal Shiite followers to the polls to dip their fingers in purple election ink. Only this time the sight of lines of shuffling, chador-clad women voting away their human rights was not applauded by the White House.

If he were capable of embarrassment or critical thought, President Bush might have caught the irony of celebrating the triumph of democracy in greeting Iraqi Prime Minister Ibrahim Jafari in Washington on Friday and on the same day having his administration condemn the election of Mahmoud Ahmadinejad as Iran's new president.

Whether the United States approves or not, the most powerful Iraqi behind the scenes since the occupation began more than two years ago has been Grand Ayatollah Ali Sistani, who, along with Jafari was sheltered and nurtured by Tehran's ayatollahs during Saddam Hussein's secular dictatorship. It was no accident that the first serious independent initiative of the elected Shiite leadership in Iraq was to welcome Iran's foreign minister and to declare, amazingly, that Iran was the moral party in its 1980s war with Iraq.

The elected leaders of Iraq and Iran are borne by the same ill wind — religious fundamentalism — which unfortunately is the first choice of many voters in Iraq, Iran and even the United States.

Elections are only one component of a thriving democracy. Unless restrained by a respected constitution and functioning balance of powers, democracy can be subverted by demagogic leaders. For the Bush White House, such complexity is irrelevant. Because the U.S. militarily controls Iraq, the flawed election there is seen as a triumph of democracy. Because Iran is an independent nation hostile to the U.S., its flawed election shows the country to be "out of step … with the currents of freedom and liberty that have been so apparent in Iraq, Afghanistan and Lebanon," according to the State Department.

Ahmadinejad "is no friend of democracy," Defense Secretary Donald Rumsfeld averred Sunday, probably correctly. Yet when he added, "He is a person who is very much supportive of the current ayatollahs, who are telling the people of that country how to live their lives," he may as well have been talking about Iraq's religious Shiite leaders, who not only beat the United States' handpicked leader in January's historic elections, but are already running much of southern Iraq as an Islamic state.

On Sunday, the Los Angeles Times reported that Shiite militias and religious parties have turned the southern city of Basra into a de facto Islamic theocracy. "Religion rules the streets of this once cosmopolitan city, where women no longer dare go out uncovered," reported The Times. "Conservative Shiite Islamic parties have solidified their grip, fully institutionalizing their power."

Thus, not only is Bush now allied in Iraq with the disciples of the anti-American Tehran tyranny, this foreign policy neophyte claims to be thrilled that the Iraqis have requested the indefinite commitment of U.S. troops to keep them in power by putting down a Sunni-led insurgency.

"I'm not giving up on the mission," Bush promised Jafari on Friday, just hours after more U.S. soldiers were killed and others wounded in a car bombing near Fallouja. Calling it "a mission" implies that our goals in Iraq are clear and finite. In fact, since the moment we easily took Baghdad from Hussein's ragtag loyalists, the situation has become murkier and more open-ended. Is our "mission" to provide security for Islamic fundamentalists hoping to turn Hussein's secular Iraq into Khomeini's theocratic Iran?

The tragic legacy of Bush's overthrow of the defanged secular dictator of Iraq, whom Rumsfeld once embraced as the U.S. ally holding back the Iranian revolution, is the triumph of that revolution in both Baghdad and Tehran.

At the very least, such obvious and looming contradictions in U.S. policy might compel debate in this country about the costs of what has been aptly termed our imperial hubris. So far, the Bush administration has managed to short-circuit that debate with a numbing cheerleader's rant about elections, as if they can always be co-opted.

A friend in need is a cunt indeed. 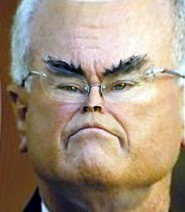 THEY LAUGHED AT HITLER