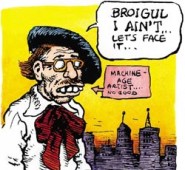 (1)John Howard is a conservative.
Wrong, he is a corporate-state radical.

(2)John Howard is a good economic manager.
Wrong, Australia is massively in debt.

(3)John Howard is holding back migrants.
Wrong, his regime has let in record numbers.

(4)John Howard has created record employment.
Wrong, "employed" is now only one hour per week.
(easy to make those dud statistics work)

(6)John Howard has been good for trade.
Wrong, the balance of trade stays negative.

(7)John Howard has made housing affordable.
Wrong, housing is totally unaffordable for many.

The best revenge is massive success.

Israel: the Promised Land of Bullshit and Bloodbaths

In Praise of Self-Medication