After successfully responding to the 2002 Bali bombing atrocity by invading Iraq in 2003 Australian PM John Howard has called for similar action following the latest terrorist attack in Bali. “In 2002 the barbarous forces of terrorism tried to cower Australians by attacking them in Bali. Our liberation of Iraq successfully sent a message to these evil people that we will not frightened,”
the 2nd oldest world leader 70 year old PM Howard said today.

“I suggest that in response to this latest attack we should send a stronger message to these Muslim extremists by invading another country, say either Syria or Iran. This will show the terrorists that we are strong and united against them, and that their hatred of our freedom only makes us more willing to give that freedom to their people.”

No other moment exists; before and behind this moment is Nothing. 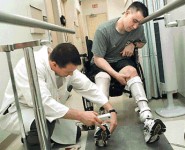